Murphy determined to do it his way 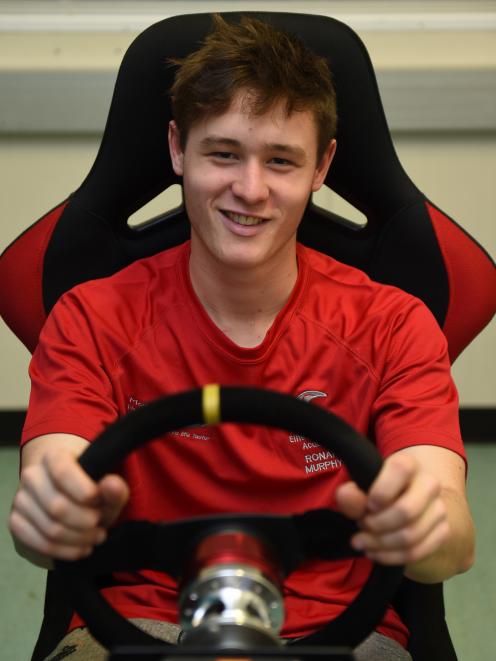 Ronan Murphy wants to carve out a career in motorsport despite father Greg Murphy's initial concerns. Photo: Gregor Richardson
It is a familiar surname and a very old story.

Ronan Murphy is just like anyone else who has tried to follow in the footsteps of a well-known parent.

He has a very large shadow to escape but the 17-year-old is keen to make his own tracks.

The Napier Boys' High School year 13 pupil knows he will always be compared with his father, Greg Murphy.

Having a four-time Bathurst winner in your corner certainly has its advantages. Although it has not been the leg up you might imagine.

In fact, if Greg had his way, his son would be playing football or cricket and forging a career in another area.

''Everybody sort of thinks that I was pushed into it by Dad,'' Ronan said.

''He wasn't hugely supportive at first because he knows the ups and downs of the sport because he has been through it all.''

Ronan, who is in Dunedin this week attending the Elite Motorsport Academy, is a determined young man and eventually talked his father around. He drafted in his grandfather, Kevin Murphy, to help argue his case and three years ago got his start in the sport.

He was racing karts but because of his late start he found he was well behind everyone else.

''All the other kids I was racing against had started when they were 5 and they all grew up around it. I had to build into it and being competitive you never want to be left behind.

''I had to work harder just to catch up with everyone.''

Ronan made the decision to move on from karts and race Formula Ford. He is competing in the Manfeild winter series.

''I'm also trying to source the budget to do the national championship which is held over summer.

''That will start at Pukekohe at the Supercars so that will be quite a big meet for Formula Ford here in New Zealand. After that, who knows?''

Right now, Ronan is focused on absorbing as much knowledge as he can during the week-long course at the Elite Motorsport Academy.

The programme has had some high-profile graduates including Haydon Paddon, Brendon Hartley, Mitch Evans, Shane van Gisbergen and Emma Gilmour.

''This [course] became one of my goals and, once I reached a certain level, I thought if I'm going to do this I have to put myself out there and part of that is the Elite Motorsport Academy. You just look at the names who have been here and that tells you the story.''

Ronan said being fast in a car was about 20% of the job.

The other 80% was about being a good businessman and being able to market yourself well. You learn everything you need to know outside of the car, he said.

''This is definitely what I want to do but obviously there are no guarantees. All you can do is give it your best and hope it pays off.''