0 Comments
Confusion and relief marked the end of the 2019 Catlins Coast Rally on Saturday.

A very surprised Garet Thomas, from Darfield, near Christchurch, driving an Impreza WRX, learned he won the rally only when he reached his service centre at Owaka.

"If Dean [Buist] doesn't come through we have, but if he does then he will have us," was all he could say as his crew scoured the live feed online from ChrisSport.

But he and his co-driver, wife Gemma, soon knew he had indeed won.

The Catlins Coast Rally drew 85 competitors to take on the challenges of the hills surrounding Owaka, beginning early on Saturday morning.

Ahead of them lay five and a-half hours of slick and slippery back roads, in weather that alternated from murky, dark, damp conditions to bursts of heavy rain.

Thomas's unexpected result was the embodiment of the old adage "to finish first, first you must finish".

"As we drove through the second-to-last stage [the 31.56km special stage five, McNab's farm] there were cars off everywhere," he said.

"It was a cool stage but a lot of it was on farm tracks.

"There was also deep gravel on the last stage through the forest which made it really tough going.

"It was one of those rallies you just wanted to stay on the road and finish well." 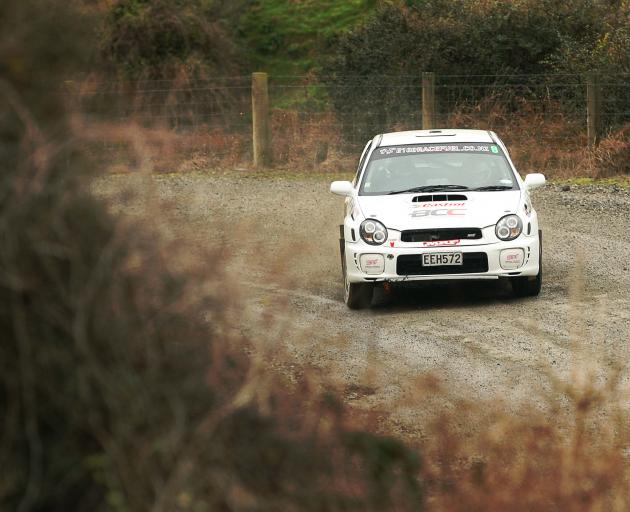 His vehicle slid off the road and became lodged in a fence.

Dean Buist, of Christchurch, driving his two-wheel-drive VW Golf GTi, then briefly took over the lead, 25 seconds ahead of Carter Strang (Mitsubishi EVO), of Wallacetown, and Thomas.

Then special stage six served up just as much drama.

Strang was seen to slow and eventually stop, while Buist had his own troubles before a bemused Thomas came home in first place.

He won provisionally by 17.3 seconds from Job Quantock (EVO) and an equally surprised but happy Dean Bond from Balclutha (EVO 6.5) just 20sec later.

"I was really pleased with the results," Bond said.

"That's the Catlins Coast Rally. You think everything is going along nicely and then it bites you - hard. It's happenned to me before like last year, so the plan this year was to drive steady all day and try to finish well."

Bond did not have the easy race he had envisaged.

His list of problems started early when his new co-driver suffered continued bouts of motion sickness.

Then their intercom went out, leaving him to concentrate on his local knowledge of the roads to keep up to speed.

By special stage four he was also experiencing brake problems.

"I had to pump the brake pedal just to get some life out of it. It didn't inspire you to go fast," he said.

"We never expected to finish in third place, as I know the last couple of stages can really bite hard, so we backed off and kept a steady pace,

"Then I saw Matt [Summerfield] off in a bank and later near the end of McNab's I saw Andrew [Graves] in the fence and then I saw Carter [Strang] stopped in six. I knew I had to be very cautious and concentrate hard on finishing for a good result."

Graves' nearest rival for the first three stages, Summerfield (Subaru), admitted he had had an amateur moment on special stage four and ended up down a bank.