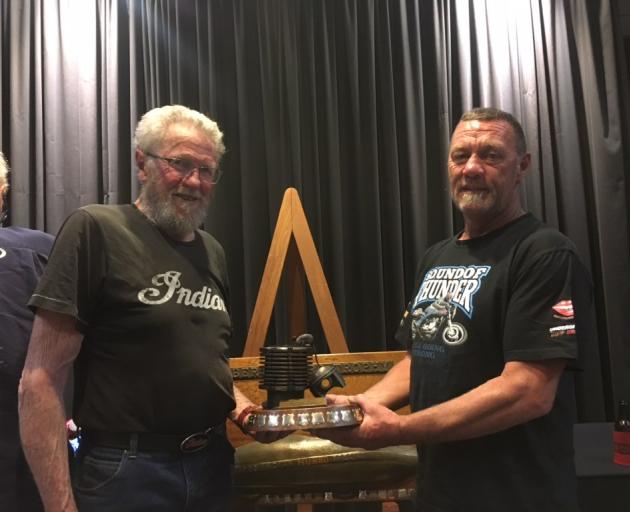 However, being presented with the prestigious Munro Family Trophy by John Munro, son of Kiwi motorcycling trailblazer Burt Munro, was a lot to take in for the Central Otago motorbike racer.

''It was humbling and surprising. It certainly put a lump in my throat. It was pretty heavy too.''

The accolade, which is presented each year by the Munro family, honours competitors who exhibit similar traits to the late Munro.

''It's special because of who it comes from, and what you do when you're there [at the event].

''It's not about winning races or any of that stuff.''

A builder by trade, Woods has quietly gone about his business during his 15 years of racing.

He has competed at every Burt Munro event since the inaugural meeting in 2006 and last year he won the British European American Racing Sound of Thunder and Central Thunder events for the first time.

''It was pretty cool, although I kept it quiet.''

Woods credits the camaraderie of the sport as the key ingredient to his personal feats.

''I've met so many people. There's lots of good friends, everyone is keen to help you. If something breaks, there's always someone to help you fix things.

''The racing family is pretty tight. Everyone from lawyers to bikies are friends - it doesn't matter what you do or who you are.''

On the track, Woods was in stellar form finishing third on his 1970 Norton Commando 750 in both the Bluff Hill Climb Champs and Invercargill Street Race events.

Woods is determined to repeat his 2018 heroics, starting with next weekend's Sound of Thunder event at Ruapuna.

A strong performance at Ruapuna would mean the chance for more silverware later in the year at the second round in Manfeild, Feilding.

''The main goal is to go get another trophy

''I gave my first BEARS trophy to my grandson because he had just turned 1. I have to go get another one now.''