How the Silver Ferns can bounce back 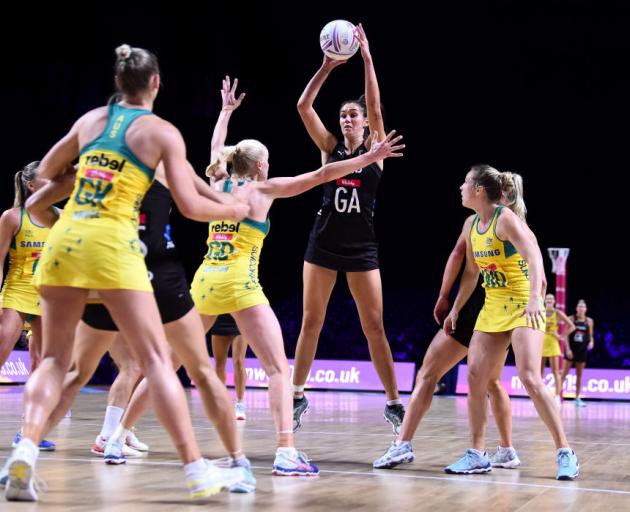 Ameliaranne Ekenasio lines up a pass during the Netball World Cup match between Australia and New Zealand. Photo: Getty Images
After the Silver Ferns’ 48-42 loss to Australia on Wednesday night, Jeff Cheshire looks at what needs to happen in order for them to bounce back in the third Constellation Cup test tomorrow in Sydney.

Adapt to the physicality

Whenever the Silver Ferns play Australia, they know a physical battle awaits. In recent times they have adapted to that well. However, on Wednesday night the Diamonds' physicality got the better of the Ferns. Coping with that and playing through it will be key tomorrow night.

The Australian circle defenders did an excellent job of shutting down the New Zealand shooting duo on Wednesday. Ameliaranne Ekenasio had a tough time freeing herself, leaving Maria Folau to take 41 of the 57 shots.

While that was more than the 53 shots the Diamonds got up, the Ferns will want to increase the quality of of those shots - which should in turn increase the percentage made.

Of course, this is easier said that done, and often missed shots come from factors in the lead-up. But a 73% shooting percentage is not going to be good enough to win many games against top international competition. On the other hand, Australia shot 90%. You can break the game down a million different ways, but sometimes it just comes back to putting the ball in the goal.

The Silver Ferns have rediscovered the ability to beat the Diamonds. But they are yet to do that in Australia. The last time the Ferns beat Australia on their turf was October 12, 2016, in Launceston. Six consecutive losses have followed. However, this is clearly a better New Zealand team than the ones that took the court during that streak.

There has been a clear shift in mentality in the past year. The Silver Ferns now approach these tough games as ones they know they can win. When it gets tough, they fight back. Tomorrow it is important that mentality remains. It is easy to take confidence from winning. Keeping that confidence after a loss can be more of a challenge. It is in that response that we will see the mental strength of this team.