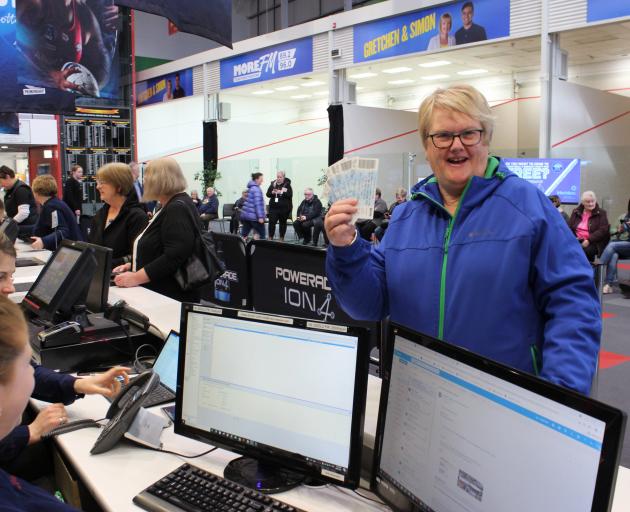 Keen to get her seat for Sunday’s ANZ Premiership elimination final in Invercargill between the Southern Steel and the Tactix was Steel fan Judy Cleaver, who queued up at Stadium Southland yesterday. Photo: Karen Pasco
Steel fan Judy Cleaver had to take a phone call while being interviewed by the Otago Daily Times yesterday.

It was her husband, Russell, checking if she had managed to secure tickets to Sunday’s ANZ Premiership elimination final netball game between the Southern Steel and the Tactix.

"He wanted to know if I’d got him his seat," she said after finishing the call.

The season ticket holder and hundreds of others made their way to Stadium Southland in Invercargill at noon to make sure their seats were well and truly bagged for Sunday night’s game.

A long line of seats was provided so people were comfortable as they waited their turn to get tickets.

For Cleaver, who has been a Steel and Sting fan right back to the days of the team playing in the Centennial Hall, there was no way she was going to miss out, saying the atmosphere just couldn’t be beaten.

"You just get all hyped up. I just love it."

Another fan who was also queueing said the mood at the games was "electrifying".

While season ticket holders were able to retain their usual spots, others were looking to get a seat anywhere.

Netball New Zealand head of events Emma Fowlie confirmed there had been more than 1000 tickets sold in the first hour after they were made available.

Another 400 tickets were released yesterday afternoon to bring the available seats left to 650 of the 3500 available for spectators at the match, she said.

"It’s the same demand we would have for a Silver Fern game."

The last opportunity to buy tickets would come tomorrow at 10am when season pass tickets which had not been purchased would be released, she said.

While she could not provide a breakdown of how many tickets were bought by Tactix or Steel supporters, she said a combination of exciting games and limited netball due to Covid-19 last year had led to a rise in ticket sales across all franchises this season.

"Live sport is just the best to watch and to be at," she said.

"You just can’t predict anything."

The umpire’s whistle will mark the start of the game at 4.20pm on Sunday.