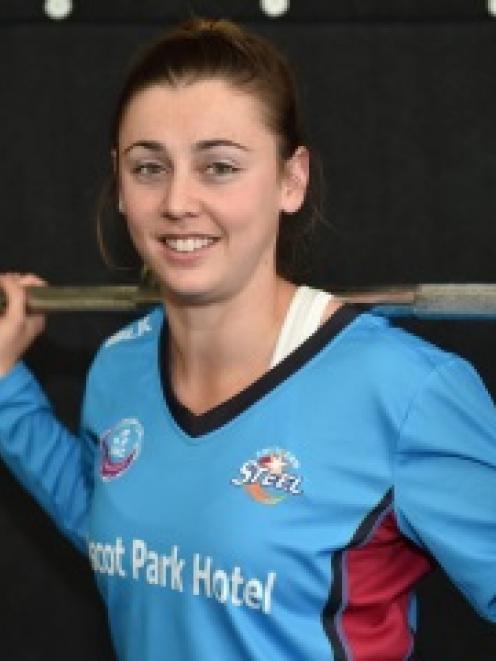 Southern Steel player Gina Crampton trains at the High Performance Sport New Zealand gym in Dunedin on Thursday. Photo by Gregor Richardson.
Gina Crampton is expecting a backlash from the Waikato-Bay of Plenty Magic when it takes on the Southern Steel in its ANZ Championship match in Rotorua tomorrow.

The Magic has lost its first two games of the season and suffered its heaviest defeat when it went down 78-50 to the New South Wales Swifts in Sydney last week.

In comparison, the Steel notched up its first round-one win since 2012 when it beat the Northern Mystics 58-57 two weeks ago and, despite a disappointing draw with the Mainland Tactix last week, sits atop the New Zealand conference after two rounds.

But Crampton (24), who became a regular fixture in the side last season after debuting in 2012, was taking no comfort from the Magic's 0-2 record this year, or its uninspiring effort last weekend.

"It's almost like the opposite, because we know they're going to be coming out with a vengeance.

"They'll be wanting to redeem themselves.

"The Swifts are a quality side, though, to be fair, and they came out firing.''

The Steel would have to play well for 60 minutes to come out on top tomorrow and not "flake out'' as it had done in the first two rounds, Crampton said.

The southern franchise has won only five of 18 matches against the Magic since the competition's inception in 2008 and has lost five of the past six, but Crampton was not bothered by that statistic.

"We know what we're going to be up against.

"They're a physical side. There are a lot of good players in there and they're working well as a team.

"But we do feel confident in ourselves. We've had a good training week this week.

"We just really need to take it to them for 60 minutes.''

The side had taken a lot of confidence from its come-from-behind win against the Mystics in Auckland, even if it took a step backwards last week.

"It shows we do have the confidence and belief in ourselves that we can stick with anyone if we play well enough.''

The Steel was focused on shedding its reputation as a "one-trick pony'' this season by not relying on sharp-shooter Jhaniele Fowler-Reid, Crampton said.

The goal shoot had again been in hot form and was the tournament's leading scorer, going into round three with 98 from 112 attempts.

"There are a lot of structures that we're trying to work through.

"It's a big work-on for us outside of the circle, to bring something more to our game.''

Despite having played only 22 games for the Steel, Crampton was named in the Silver Ferns squad late last year and was in line to suit up for the national side later this season.

That would not be a distraction, as the test and domestic schedules did not overlap this year, she said.

Crampton moved to Dunedin from the capital seven years ago and now considered the city home.

She had gained a diploma in personal training and postgraduate diploma in physical conditioning from the University of Otago, and was running fitness and skills sessions for several clients to give her a break from training.

The wing attack has been a key player for the Steel so far this season, receiving the most centre passes and contributing a team-high 21 goal assists.

Shannon Francois and Brooke Leaver, who has come off the bench, have contributed 19 goal assists each.

The Magic was missing 206 caps' worth of experience last week with Grace Rasmussen (calf) and Leana de Bruin (foot) out injured.

Magic chief executive Tim Hamilton said it was doubtful either of those two would be back for tomorrow's game.

The last time the sides met was in the New Zealand conference elimination final last season, when the Magic prevailed 71-69 in extra time in Hamilton.