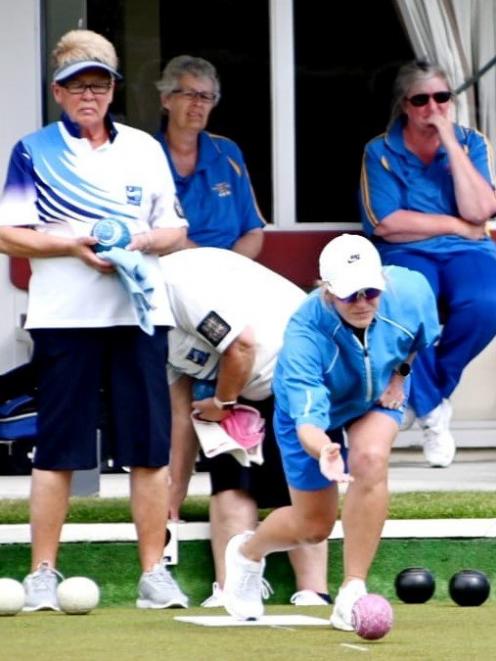 North East Valley second Bronwyn Stevens delivers a bowl during her team’s 21-5 win over St Clair in the final of the Bowls Dunedin open women’s triples on Sunday.PHOTO: SUPPLIED
The Sarah Scott-skipped North East Valley team overcame an early scare in the first round of post-section play to win the Bowls Dunedin open women’s triples title at the Wakari club on Sunday afternoon.

The 21-5 victory over the Carolyn Crawford-skipped St Clair trio in the final handed Scott her 10th centre title, while it was a second for lead Angie Francis and a third for Bronwyn Stevens.

In the first round of knockout play, the Valley trio found themselves down 12-10 against the Fairfield three of Pam Maclennan, Loris Miller and Evelyn Harris, heading into the final end of the 18-end contest.

The Scott team drew on all its experience to pick up three shots and escape with a 13-12 win to progress to the quarterfinals.

That run of form followed Scott into the final against Crawford’s St Clair three, who were unable to respond to the dominance on show from Scott, Stevens and Francis.

“Angie off the front was drawing really nicely, and Bronwyn would come up and play a couple of up shots and make it easy for me.”

For Crawford, the wait for a 29th centre title continues following a string of close calls in recent seasons.

Crawford was full of praise for team-mates Trish Marr and Sharon McCaw as they cruised through the playoff stage and rose to the challenge of the strong Green Island combination of Shannon McEwan, Karen Lobb and Lee Grigg.

Searching for answers to combat Crawford’s St Clair three, after they appeared to be cruising into the final, Green Island opted for short ends, and the points started coming.

Going into the 18th and final end, it was a winner-take-all situation with the score at 13-13. Fortune favoured the St Clair three when they opted for a longer end to throw Green Island off its game, winning 14-13 and gaining a place in the final.

In the final, the Crawford three was unable to respond to the firepower from the North East Valley team.

“We struggled, and they played really well,’’ Crawford said.