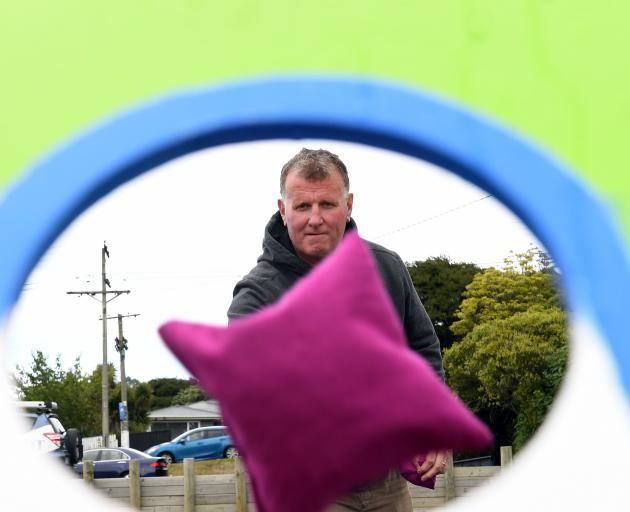 Well, not easy — but not that difficult, either.

Like when you watch Wimbledon and fancy yourself to get a serve back. Or throwing a backhand winner down the line.

The ball does not appear to be going that quickly and it requires only a decent bit of co-ordination.

Then watching basketballers throw up air shots and criticising them. It ain’t that hard, surely. Ball, and basket — put the two together.

So, when one gets the invite to head out and play some cornhole at the New Zealand Masters Games, the mind starts thinking once again how it could — well, make that a should — be quite easy.

Cornhole is a game which started in the United States or Germany — depending on who is telling the story — and has now become very popular.

It has even become a broadcast sport, the ACL (American Cornhole League) is now big-time, and it is a college sport in the United States. Money is involved.

So, up near the theatre of dreams at Montecillo yesterday, one went to see what this cornhole caper is all about.

Basically, the game involves getting bags full of corn — hence the name — and throwing them at a board which has a hole in it.

Get the bag through the hole and it is three points. On the board is one point.

The bag is thrown from a distance of just over 7m.

So, up one ventures to the throwing line, with plenty of confidence, and the first bag is thrown.

Result — nowhere near. Miles away.

Must be nerves. Second time around — still a long way from the hole.

And so it goes on.

That 7m may sound like not a lot but it is.

The hole is not that big, either. It’s not like throwing a lolly scramble.

One keeps going but there is a vicious cross wind and possessing an arm with the power and accuracy of a Tuatara pitcher, the safest place to stand is right near the hole.

A couple hit the board for one point but there is no success of getting it through the hole.

In the end, one walks away a broken man — this cornhole lark is no walk in the park.

The board won and it was daylight second.