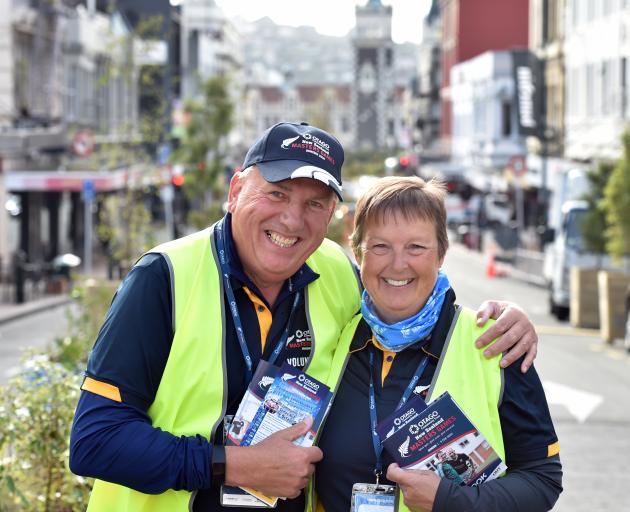 English couple Ross and Carol Haddow have taken time out from a holiday to volunteer at the New Zealand Masters Games being held in Dunedin this week. PHOTO: PETER MCINTOSH
It would not be a holiday without a high-vis vest and a laminated plastic necklace.

But then you cannot just drink coffee every day.

That is how English couple Ross (67) and Carol Haddow (63) view their New Zealand holiday.

The pair are among the many volunteers helping make sure the New Zealand Masters Games being staged in Dunedin this week run smoothly.

The couple split their time between their home in Nottingham and Dunedin these days.

They have a son — James Haddow — and two grandchildren back in the United Kingdom. But their daughter, Emma Laurence, and her two children live in Broad Bay.

Last year, they came out for 10 weeks, but they have doubled that this year and now hope to spend 20 weeks in New Zealand each year.

Spoiling the grandchildren and visiting cafes has been great. But they wanted to become more involved in the community and decided to volunteer for the Masters Games.

Fully equipped in those wonderfully sexy high-vis vests and armed with information pamphlets, the duo have been getting around the events and chipping in where needed.

"It is just a way of getting into a community and meeting people," Carol said.

"You can be here for 20 weeks and do nothing. We can’t afford to go out for coffee all the time, so we’ve got to do something that is a bit different.

"It is basically a way of meeting local people and being part of the community."

Ross said they had worked more than 30 hours this week and "we’ve definitely enjoyed the experience".

"Perhaps the most enjoyable job was helping with the wine tasting. Sadly they wouldn’t let us have any," he complained.

"Next time we are going to be competitors," Carol quipped.

"There were some girls competing and they weren’t doing so well, and I said ‘you just need to practise more’," Ross added.

Ross has a sporty background. He played rugby right up until he was 50 and amassed about 700 games. He has also competed in marathons and triathlons and done quite a bit of cycling.

The couple plan to volunteer again in two years time and may even head to Whanganui next year for the 2021 Masters Games.