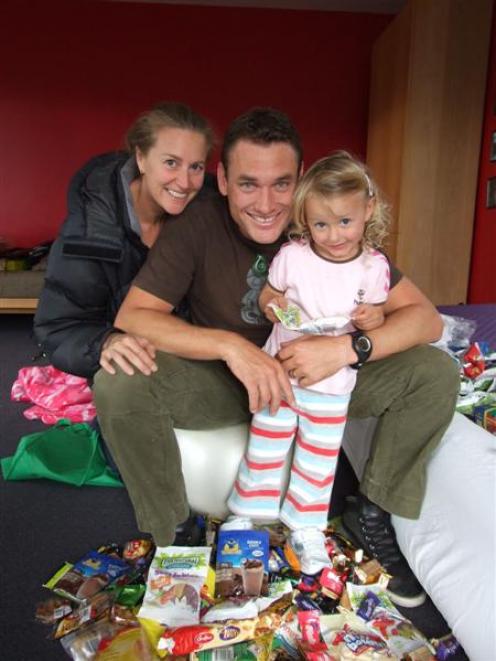 Wayne Oxenham, with the help of wife Lynne and daughter Ashley, packs his bag full of sweets in preparation for the Godzone adventure race. Photo by Olivia Caldwell.
Wayne Oxenham completed his first adventure race a decade ago and has been into the sport ''way over his head'' since.

The fitness junkie, who once could not get enough of adventure races lasting days without sleep, is a bit more relaxed now, and will be competing in the Godzone adventure race for a bit of fun.

Now 41, he wants to spend more time with wife Lynne and 2-year-old daughter Ashley, as well as the newest family member, due to arrive in June.

''They [adventure races] are pretty full on. You put yourself through a lot and it takes a long time to recover. But the fun aspect and the team aspect and the challenge of it is awesome.

''I've toned it down. I've got a little girl and pretty full-on work, so I had to kind of step back.

''It comes down to priorities now. I did five years of this quite seriously and became world champion at one point and now we're looking at other things to enjoy in life, a bit of family time, and time to read the newspaper on a Saturday morning, rather than training.''

After competing on a whim in 2003 in the ARC 12hr with his brother - and winning it - Oxenham become addicted to endurance races.

He said the feeling of accomplishment at the finish line was unique and never lessened. All that was needed was a good sense of humour, a fitness base and a ''glass half full'' personality.

''I love the fact it's not just brawn and speed. There's a lot of tactics, there's a lot of navigation. Team work is absolutely essential. You look after your team.

''I've always tried to race with teams that want to have fun.''

In addition to his funny bone, Oxenham will be relying heavily on muscle memory in Queenstown, as it has been three months since he last went for a run after hurting his calf muscle.

''I've been really hopeless [but] I'll be fine. Your body knows how to get through these things.''

And coping with an average of two hours sleep a night during Godzone? Second nature for the seasoned athlete.

''Your body figures out how you can fight and get through it and kind of control it. I remember my first year racing - it was nasty. You have this kind of sleep monster attack you and you try to fight it off and it'll come back.

''You struggle to focus and communication breaks down and everything kind of goes in slow motion.''

Oxenham has already packed a bag full of sweets, gels, electrolytes, canned soup and caffeine pills, but after six days of sleep deprivation, navigating around Queenstown's isolated bush and running himself into lunacy for six days on end, there will be one thing on his mind.

''Pizzas and ice cream at the finish.''

• Backpack.
• Asthma inhaler.
• Anti-chafing ointment - ''Five days . . . you get pretty bad chafing if you don't look after yourself.''