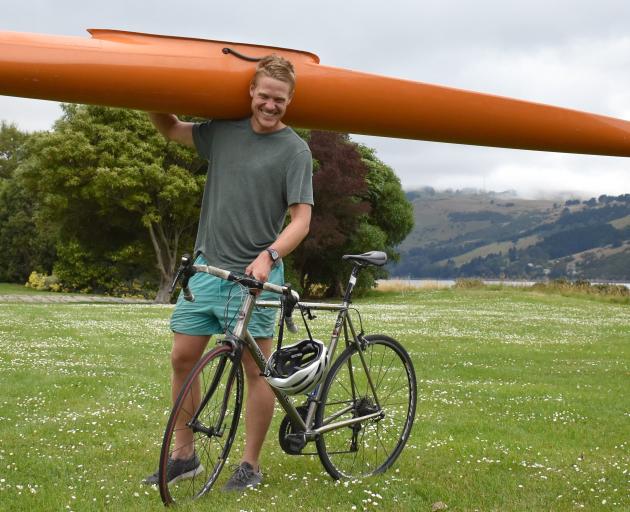 University of Otago master’s student Jonah Belk loads up, ready to take on the world championship of multisport Longest Day at the Kathmandu Coast to Coast for a second time. PHOTO: WAYNE PARSONS
From endurance skiing events in the northeastern United States to being one of Otago's most respected multisport athletes, Jonah Belk is now better prepared to contest the world championship of multisport Longest Day next month for a second time.

Belk (28), who finished 14th in the elite class in 2018, clocking 13hr 16min 15sec, said that after a disastrous introduction to the event two years ago at the Kathmandu Coast to Coast, a good result this time round would be cutting 10min from that time and giving the top 10 a nudge.

Ten years ago, Belk (28) was carving up the North American cross-country ski slopes while attending high school and university in New Hampshire, before switching to what was a promising sojourn in triathlon.

A competitive streak promoted him into a number of ITU and Oceania races, with mixed success, until he stumbled across an interest in multisport.

"I gave triathlon a shot for about two years, but — no offence to triathletes — but for me, I just got sick of looking at a black line in the pool.

"I guess my mind just tends to wander, so I jumped into multisport, and it seems to fit me quite well."

Belk said he had always heard about the Coast to Coast and a number of its war stories, but the seed was planted when he met up with Braden Currie in the United States.

When Belk returned to New Zealand in 2017, he sold his car for a kayak, bike and numerous other multisport toys to set himself up for the 2018 Coast to Coast.

He was ranked in the elite class and tipped for a top 10 finish.

But, behind the scenes, Belk's preparations had all the trappings of a weekend warrior.

"I don't think I ever really understood just what was involved.

"The longest I had ever done was three or four hours. So jumping up to a 12-hour-plus event was a bit of a shock to me. I made the mistake of applying the multiplier approach to the event, where I fooled myself into thinking it was just three or four of those and the run was just a couple of half marathons.

"I thought I had it covered. I went out a hot pace and blew up at the first transition. I'd blown a tyre and smashed my legs riding on a flat tyre. Then took off on the run thinking I'd catch up. But partway through, I don't know what happened. I just went off the trail and became lost."

Once he found himself back on course, he had become a spent force and had to walk over Goat Pass.

"It was quite miserable. I got lost in the bush. And another thing I didn't learn was that you've got to eat. The calorie intake is very important in a race such as this. This time around it's going to be a whole new approach."

Belk said that despite training guidance from Olympic triathlete Nicky Samuels and 2019 Longest Day champion Simone Maier, diving blindly into the deep end and not fully understanding the pace judgement and nutrition side of the 243km event was a huge wake-up call.

Although better prepared this time round, Belk will once again trust in the support crewing of his parents Q Belk and Sherry Thornburg.

"I'm still pretty stubborn. But they understand my dark side and will still talk to me long after the event if things go horribly wrong."