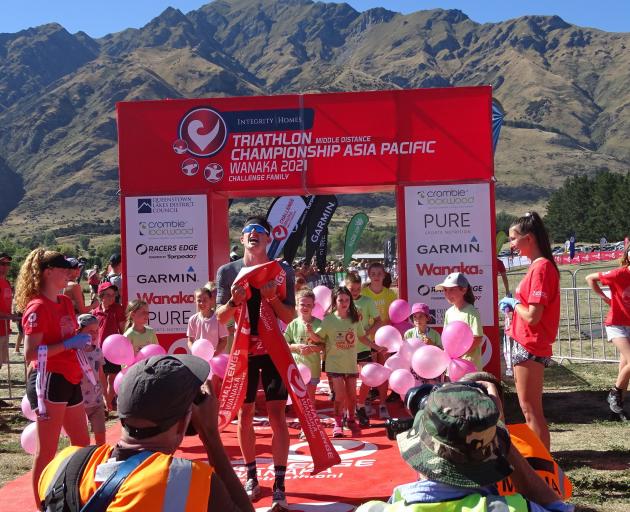 Currie was out to beat Kyle Smith, who has got the better of him twice this season — at the Suffer event in Rotorua and the Tauranga half ironman.

But Smith could not be beaten, winning the Challenge Wanaka event by 13 seconds over Currie.

In the women’s event, Hannah Wells, who had won in 2019, claimed her second victory.

Smith had beaten Currie by more than three minutes at the Rotorua Suffer and then at Mount Maunganui by 10 seconds, and it was close again on Saturday.

Smith came out of the water first and was fast off on the bike, where he lengthened his lead to just over four minutes on the 90km course.

Over the 21km running course Currie took four minutes out of Smith, and they could see each other at the finish line but Smith, from Taupo, held on.

He admitted he rode too hard after mechanical failure meant he had no guide to how to pace his bike.

"I just rode to feel and it is super hard as I felt good, so when you get out there you push way too hard and I thought I had to shimmer down and wait for the run, knowing how hard it was going to be — and it was brutal,” Smith said.

“I knew Braden would be coming home strong so I knew I had run as hard as I could down the hill and ignore the pain from my feet and stomp it. I only just held on really."

Currie gave it everything on the run.

"I have been doing a lot of running lately and feel on good run form. I didn’t really fade, just felt better and better all the way through the run. I guess it was just a touch too much lead. I think there was 3km to go and I knew I had to go 15 seconds faster than Kyle and it was all downhill.

"I thought however much he blows up, it is still hard to run that much faster. Yeah, I gave it everything and tried to make it as exciting as I could.”

Wells stayed with Rebecca Clarke in the swim and then pushed into the lead on the bike, and was more than four minutes ahead going into the run.

“I don’t think anyone will like the first 25 minutes of the run, it’s pretty gnarly — but the down afterwards is flowy and fun,” Wells said.

In third place was Maeve Kennedy, an Australian who has recently moved to Wanaka and gained professional status.

About 800 competitors lined up in the event.