Couple in top shape, despite break 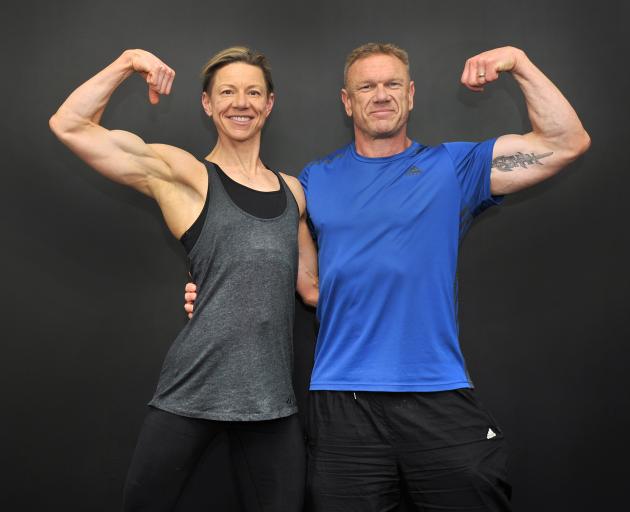 Delaine and Mike Tabb practise a few poses before the Asia-Pacific and Otago Championships tomorrow. PHOTO: CHRISTINE O'CONNOR
Look away now if you have been putting off going back to the gym.

The uber-fit married couple featured here are unlikely to improve your mood much.

Delaine and Mike Tabb are back in tremendous shape and will team up in the pairs competition at the Asia-Pacific and Otago Championships at King's High School tomorrow.

Both have form. Mike has competed in bodybuilding competitions previously but not in the past 20 years.

The last time he donned a fake tan and a small pair of togs on stage was n 1999. That is a while between protein shakes.

The head of physical education at Taieri College was lured back into the sport by his wife. Delaine is a former national and world champion.

But the policewoman quit the sport to start a family. The couple have three children - Conan (9), Riker (7) and Dakota (3).

Life is busy. But after putting everyone else's needs first for the past decade, Delaine wanted to do something just for herself.

So she headed straight back to the gym and got herself extremely ripped. Mike did not want to be left behind. It was FOMO [fear of missing out] that got to the 49-year-old.

"I knew I'd resent having to look after the kids and do all the food if she did it and I didn't," he said.

Mike has entered in the over-40s physique, while Delaine will contest the over-40s figure. And of course they are teaming up in the pairs competition.

Mike hopes to do well. He is under a little more pressure than your average competitor because he is a former judge.

"I think other people expect me to do pretty well because I've been judging and coaching and stuff, so I have to walk the walk.

"And I've got to stand next to Delaine when we do pairs and she is world-class."

Delaine last competed in 2007. The 42-year-old was at the top of her game that year.

She was second the South Island championships, first at the nationals and went to Universe in Spain where she won the figure tall category.

"It is quite a selfish sport. It is all focused on your training and your dieting," Delaine said.

"But now we have three little people who we have to look after and it is the first time that we have competed together.

"I wasn't sure how we'd both go do it - having two tired parents. But it has actually been a lot easier with both of us."

The tournaments will get under way at noon tomorrow. The event has attracted 34 competitors.

Organiser Kristy Ovens is ambitious for the region and hopes to host the nationals in Dunedin in "the next year or two".