Perhaps there was something to that as well.

Eliza Meekings had not even intended on running in the annual University Clocktower race. 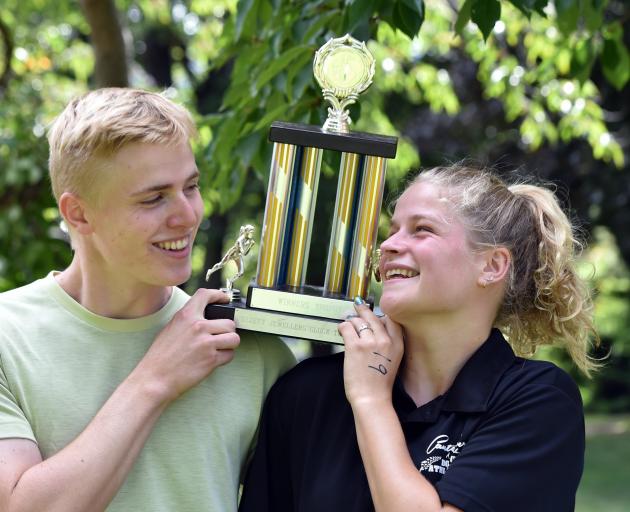 John Gerber and Eliza Meekings celebrate with the trophy after winning the men’s and women’s titles at yesterday’s University Clocktower race.PHOTO: PETER MCINTOSH
She had been there to support her boyfriend, Gerber, before deciding to enter half an hour before the start.

It turned out to be a good decision.

The couple claimed the fastest man and fastest woman titles at the race, which attracted about 50 runners. 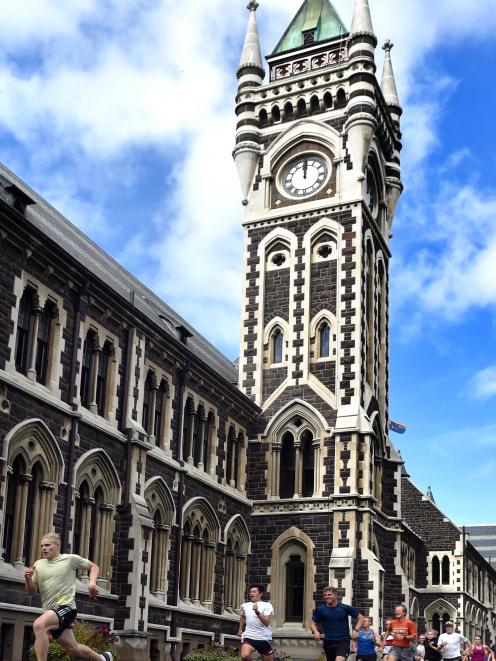 John Gerber leads the field round the first bend at the University Clocktower race yesterday. PHOTO: PETER MCINTOSH
Gerber completed the 370m track in a sharp time of 48.23sec.

He beat home Cameron Moffitt and Josh Hou home, and all of them beat the chimes.

He had not known the event was being held this year, but was cycling home from the physio with race organiser Jared Monk on Thursday night and decided to enter.

An accomplished 400m runner from Rangiora, he has won the national title in the under-20 grade the past two years.

This year he will take the step up to the senior men’s grade at the championships next weekend.

A pole vaulter from Christchurch, she had decided to enter at the last minute and winning had not even crossed her mind.

She was thrilled with the result and said the event had been a good one.

Meekings is a first-year student, studying for a bachelor of arts in physical science and classics, as well as first-year law.

A back injury had put her out of pole vault for the season, although she said it had felt all right while running.

The race was resurrected by Monk in 2019 after a decade’s hiatus.

It had been a regular fixture of Orientation Week throughout the 1990s and 2000s, inspired by the film Chariots of Fire.

In its first year back, it attracted only eight runners but its second had drawn 28, and that number nearly doubled this year.