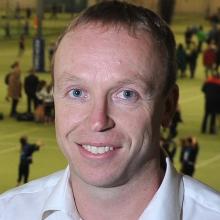 Blair Crawford
The Edgar Centre will lose more than $10,000 in revenue this week due to the rise to Covid-19 Alert Level 2.

The biggest dent to the bottom line comes from the cancellation of the Southern Steel’s match against the Mainland Tactix on Sunday.

However, the facility has also had meetings and lunches cancelled, while community level netball halted training sessions for the remainder of the week and some miniball games had to be called off.

General manager Blair Crawford said it all added up.

"All those things are our income for the week and we would be down more than $10,000 for the week," he said.

"The Steel game was a big loss of income and that is all part of the revenue loss from this."

The shift up alert levels has also created a lot more work.

Staff have had to hastily re-establish the sanitation stations and the building has been separated into different zones so it can safely accommodate more than the maximum allowed gathering.

Essentially, there are five separate zones. The lounge upstairs, the high performance cricket centre plus the main building and extension have been split into three distinct areas as well.

Each area is limited to 100 people as per Alert Level 2 restrictions.

There have been some logistical problems to overcome as well. There needs to be more of a gap between fixtures to allow people to leave the facility before the next group arrives.

Contact tracing has also been re-established. There are three ways to record that information — the Government tracking app, the iDMe app and a manual system.

During busy periods there will be a couple of entry points in order to meet social distancing requirements.

"It has meant more work for less people coming in," Crawford said.

"The difficulty was we had half a day’s notice from going from 100% of use to 100 people [in each area], so that was quite a massive change in quite a short period of time.

"It was pretty difficult for the various sports bodies as well."

The Edgar Centre closed during the nationwide lockdown but was able to retain its staff by leaning on the Government wage subsidy.