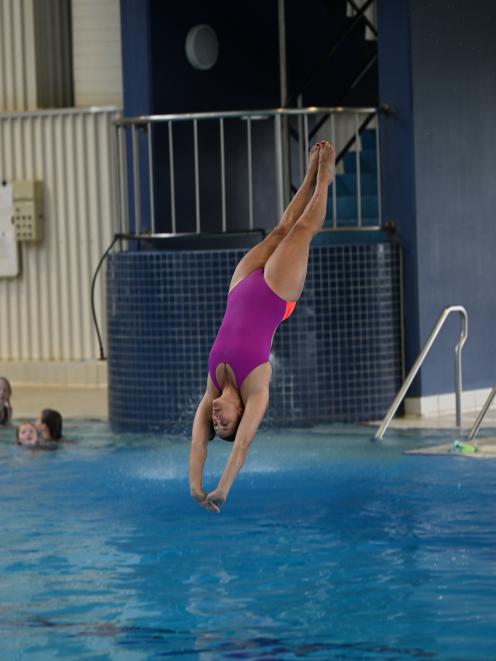 Katrina Bryant in mid-dive during a training session at Moana Pool this week. PHOTO: STEPHEN JAQUIERY
Diving was a big part of pushing Katrina Bryant to become a physiotherapist.

Now, being a physio has helped push her back to diving.

The 49-year-old former junior national champion is returning to the sport for next month’s New Zealand Masters Games.

Bryant, who works at the University of Otago’s School of Physiotherapy, has been training with Diving Otakau at camp this week.

She had been "pleasantly surprised" at what she had been able to do, and had avoided injury so far.

It was 18 years since she last did a proper competition — also a masters event she came back for — just after her second child, Kate, was born.

"I’ve been really nervous thinking I’m going to hurt myself.

"I can’t believe, when I stand up on the 3m board, that we used to do the things we did from there.

"I’ve been training a couple of times and I don’t want to tempt fate, but I’ve been pleasantly surprised. I haven’t hurt myself too drastically.

"And I can still pull off a couple of dives, which is great."

Her daughter Kate, now 18, went on to compete for Otago and represent New Zealand herself.

She had not seen much of her mother dive, while 7-year-old daughter Ariana and Bryant’s partner, Malcolm Dacker, have never seen her compete.

The opportunity to compete in front of them, as well as son Will (20), had been part of what inspired her.

Her research into encouraging elderly to keep active was also a source of inspiration.

"It doesn’t matter what you do but keep on moving," Bryant said.

"The Masters Games is a really good opportunity to encourage people to train for something and compete."

Bryant had been a talented junior diver and was coached by Dick Lamb.

She won the national 1m and 3m junior titles, before travelling to Texas for the 1984 junior world championships as a 12-year-old.

When she began studying at university, she decided to focus on that and give diving away.

- Entries continue to come in for the Masters Games, which start on February 5. There are now 3260 people entered across all events.