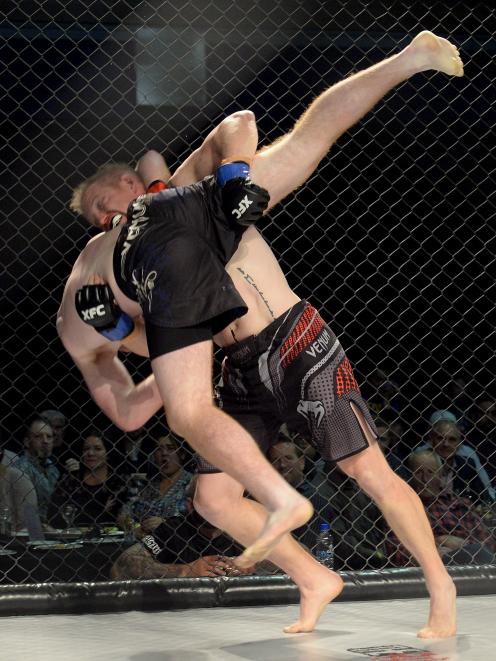 Mixed martial arts fighters and kickboxers put their chins on the line last night when the Xtreme Fighting Championship (XFC) was held at the Edgar Centre.

The nine-bout fight card was full of hard-hitting entertainment, with seven amateur MMA fights and a revised two professional kickboxing.

Lightweights Flynn Booth (Hammerhead) and Christchurch’s James McBride (Universal Vale Tudo) put on a display worthy of a main event, as they went at it with plenty of heart and relentless aggression.

Booth was strong on his feet with some clean striking, but McBride showed what a tough guy he is by taking Booth to the deck a few times, while displaying a strong all-round game and eventually submitting Booth late in round three with a highly skilled Kimura submission.

McBride took his record to seven  wins and one loss while Booth fell to 2-2.

Webster won  via TKO after referee Apii Taia stopped the fight 1min 51sec into round 2.

Webster (1-0) dropped Mata’afa with a clean right hand in round one and she sealed the win with  some big and impressive straight punching, as both women traded on their feet.

Kickboxers David Boyd (Hammerhead Queenstown) and Invercargill’s Levi Beatie (Toa Fighting systems) did not hold back in their 63kg fight.

Dunedin’s Anne Wilson (Hammerhead) continued her phenomenal run of form with a gallant win over Maria Churcher (Academy of Combat) via unanimous decision in their MMA bout.

Wilson (3-1) was like a woman possessed as she hunted the much younger Churcher for most of the fight, with some impressive punching and in particular body shots, to win her fourth combat sports fight in five weeks.

Greg Stevenson-Wright (Hammerhead) put on a brutal display of striking when he won his 86kg catchweight fight against  Dunedin’s Jason Marsh.