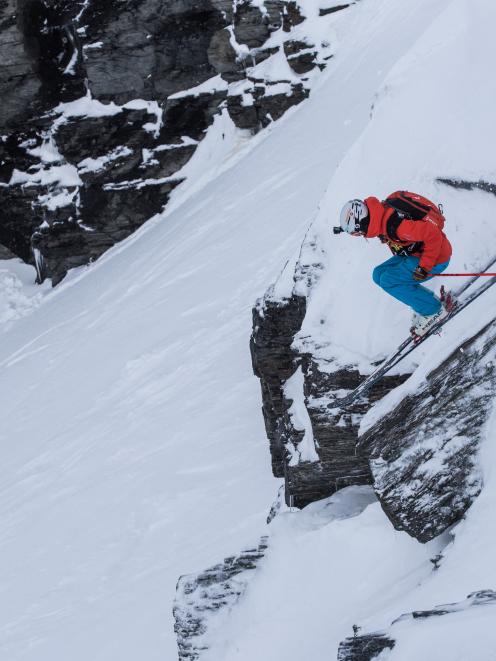 Wanaka freeride skier Sam Lee (pictured) is excited about next week’s freeride world qualifer at The Remarkables. Photo: Jay French
For freeride skier Sam Lee, there is nothing better than flying down the face of the mountain, jumping off cliffs and performing tricks people are more accustomed to seeing in the halfpipe than in backcountry powder.

And that is exactly what he will be doing when he suits up for the two-star and four-star freeride world qualifier events at The Remarkables this week.

The 27-year-old described freeriding as being given a mountain face and picking a route that flows and looks nice while also adding in tricks off cliffs to "bump up the excitement factor".

"There’s a pretty epic field of people coming over from the United States and Europe.  I think there’s a couple of World Tour riders as well so it should be a pretty awesome event."

Lee, a ski racer turned freerider, said he would be using the two-star event, which earns fewer qualifying points than the four-star event, to practise his freestyle skills before the next world tour that begins at the end of the year.

"During that time we’ve noticed a lot more freestyle being added in, a lot more people chucking 360s off cliffs and other moves like cork 360s on top of your standard backflips and the rest.

"It’s kind of like the chase is on to learn a bunch of those tricks because my background is more in like technical skiing, as opposed to freestyle, so it’s been a big focus for me recently because I want to try and keep up with the game."

Plenty of snow this season had left the courses looking really good, he said.

New Zealand freeriders dominated proceedings in the freeride events last year, winning seven out of 12 medals on offer, and they will be hoping for more of the same this time around.