Para athlete back on top for Beijing

Paralympic sit skier Aaron Ewen will this weekend complete his long-awaited comeback to sport after a traumatic crash in 2013 robbed him of the ability to continue as a competitive mountain biker.

He bounced back from serious spinal injuries to qualify for the PyeongChang Winter Paralympics in the downhill sit ski in 2018, but disappointingly, could not compete then after fracturing a hip in training.

The Wanaka skier will finally get to show off his downhill skills at the Beijing Winter Paralympics.

He said hearing the unforgettable words "you’ll never walk again" after his accident was an emotional experience. 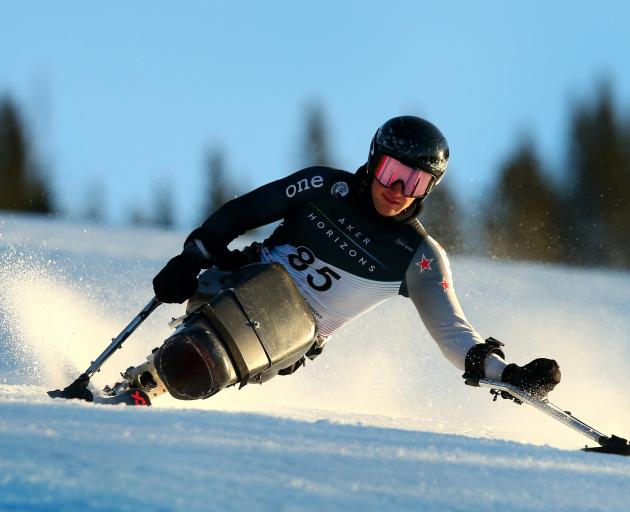 When he first tried skiing at Mt Ruapehu, the situation was "unreal", he said.

"The fresh air and looking at the view, it was such a great experience for me.

"My mate spent the whole time picking me off the ground. Cheers to Cole. It probably wasn’t the best day for him."

He left the mountain feeling sore and deflated but in love with sit skiing.

It was important to him he was not treated any differently following his injury.

His good friends still took him everywhere and did not "bubble wrap" him, and his parents were the same.

"That helped heaps. I was treated just like everybody else," he said.

He injured his spinal cord when he was 16, in a huge crash at the end of a practice day during a national mountain biking event in the Hunua Ranges, near Auckland.

He spent six days in Middlemore Hospital before being transferred to the Auckland Spinal Unit in Otara for five weeks.

Initially, he was determined to walk again and took on a big mental battle.

For a young, fit, active man, it was hard to accept he would be in a wheelchair.

"I needed to stop being in denial that it was going to get better ... It’s a weird one.

"Most injuries you can see an end point but this one there is no end point.

"Half a year went by and my old man told me you have got to accept that it is what it is and move on, otherwise you are going to be stuck in the same place. That was a turning point, I guess."

Ewen said New Zealanders were "bloody lucky to have ACC" and "without it I would be screwed".

"I’ve met people [overseas] in a wheelchair who are really struggling financially, and it affects their health."

ACC had covered the cost of surgery, hospital stays, time in the spinal unit, medical fees and helped with a range associated costs. These included supplies, wheelchair equipment, home modifications and a 4WD car to get up Mt Cardrona.

Ewen moved to Wanaka in 2015 so that he could train at Cardrona Alpine Resort.

He recommended that anyone who had sustained a spinal cord impairment should look into competing in para sport.

"It’s been massive for me.

"Skiing is the one if you are getting into para sport. Get into it and don’t look back."

Hall will be competing in the standing ski. Beijing is his fifth Olympics. He has won two gold medals and one bronze.

Peters will be competing in the sit ski at his third Olympics. He has won one silver medal and one bronze.