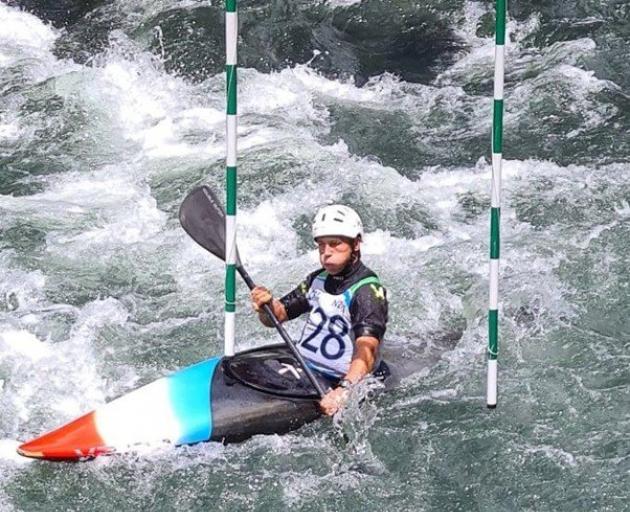 Dunstan High School pupil Tom Goldsmith has lofty goals in the sport of canoe slalom. PHOTOS: SUPPLIED
We often hear of sporting success stories across our mainstream sports. But what about those athletes who achieve great things in a "minority" or "non-mainstream" sport? Are they achieving the recognition they so clearly deserve?

Tom, a year 12 pupil at Dunstan High School, has recently qualified for the New Zealand under-18 canoe slalom team that will travel to compete in the world championships in Ivrea, Italy, in July. Canoe slalom is a timed event in which competitors navigate a whitewater course by passing through a combination of upstream and downstream gates. Each course can be a maximum of 300m in length with a maximum of 25 gates.

Tom started canoe slalom at the end of year 8 at 14. Since then, his biggest achievement has been making it into this New Zealand under-18 team as it is the hardest thing he has done so far in his career. He is dedicated to his training and competing in the whitewater events in Queenstown which has set him up well for competitions. Tom has also raced in the extreme slalom, making the final in the New Zealand Open. Tom’s future goals include making it into the under-18 team two years in a row as well as aiming for first place in the under-18 category at the national championships.

Taylah and I have been doing aerobics for nine years. We have competed at regional level on several occasions and have been awarded Otago champion for our respective levels several times over the years. We have also both represented Otago for aerobics at a national level four times. Taylah currently competes in open level 4 15-17 years, and I compete in ADP 3 12-14 years (aerobic development programme working towards competing internationally).

Aerobics is based on the ability to perform continuous complex and high-intensity movement patterns to music. The routines demonstrate flexibility, power, strength, and compulsory elements to varying levels of difficulty. — Dannika Pentecost

Paris loves rodeo and riding horses fast, and she has been riding at rodeos for three years. At the age of 16, he broke into the open division of barrel racing during her first season in second division. Recently, she represented the Southern Region at the Western World South Island competition, in which she won the open division barrel racing, running a personal best. Paris enjoys rodeo because everyone supports and encourages each other to do their best and she enjoys the adrenaline rush after each run.

What I love about BMX is racing all over the South Island and sometimes New Zealand, seeing friends, meeting new people and putting myself to the test. My favourite memory was when I raced in the 2015 nationals in Christchurch and placed 13th in New Zealand at the age of 10. I sometimes go to the track once a week and sometimes do sprints up and down my street at home. BMX is a great sport overall and I recommend it to boys and girls because it’s not just for boys. BMX may be scary at first but it’s so fun and very competitive. The best advice I’d give is if you fall get up right away and finish that race. Push yourself to the limits and never give up on your dream in this sport. — Kate Allan-Chalmers 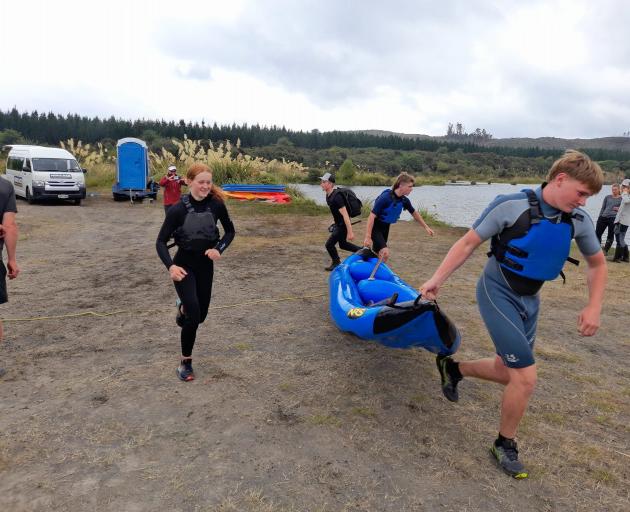 On Sunday, January 23, we flew out after an early start headed for Tongariro. Without a clue of what we would be getting up to in the coming week, I believe we were all a little worried about what we had gotten ourselves into. But we were also excited to make some friends and give it our best shot. Day one started with a series of one-hour activities involving kayaking, problem solving, and more kayaking but blindfolded. After lunch we were faced with a 16km run during which we had to carry two tyres between the group. This was a head-to-head race with all 10 other teams and was probably not a highlight of the week. Day two, we had another series of one-hour activities which included rock climbing, high ropes, and a task where we had to cross a pool on a wire in harnesses, followed by a head-to-head kayak relay and a head-to-head rogaine on land and in water. After these two days, we were all glad to be halfway through the week and began to prepare for the overnight expedition on Wednesday.

Wednesday came and we were handed a map and had to make our way to the campout. This expedition ended up being 20km-25km long and included kayaking, running and caving. We made it to camp in eighth position, which was an improvement from the race on the first day of the week. As a group we set up camp with our new mates from Rosmini College and Taradale High School and had a good feed of nachos. An early start on Thursday morning after the campout lead to a seven-hour rogaine in the Tongariro National Park. The eight of us plus group leader Josh made our way around the base of Mt Ruapehu. I think we could all agree that this was the most enjoyable day as we were able to chill out a little more and enjoy the views while searching for checkpoints.

Friday morning involved a smaller stage race where each group member was required to complete individual activities. This was a great way to finish off the week. It was a very tough and challenging week for us, but it was a great experience. We made some friends and had a good time. — Cameron Lord

Nat is a year 11 pupil at Mount Aspiring College. He is an avid climber who enjoys living in Wanaka because of the various cliffs and rocks that there are to climb. His sporting highlight is climbing a local route called "Skinhead" at the Wanaka Blue Wall. Nat doesn’t have a training regime; he mainly climbs to see the amazing rocks and the amazing places that it can take him. He does, however, sometimes work on spots that he is finding tricky. In his spare time he enjoys biking, playing football and surfing on the Hawea Wave. In the future, Nat’s goal is to climb a route called "Xena", which is located in Fiordland at a crag called Little Babylon. We are very excited to see where climbing may take Nat in the future. — Ben Simmers (sports committee leader) 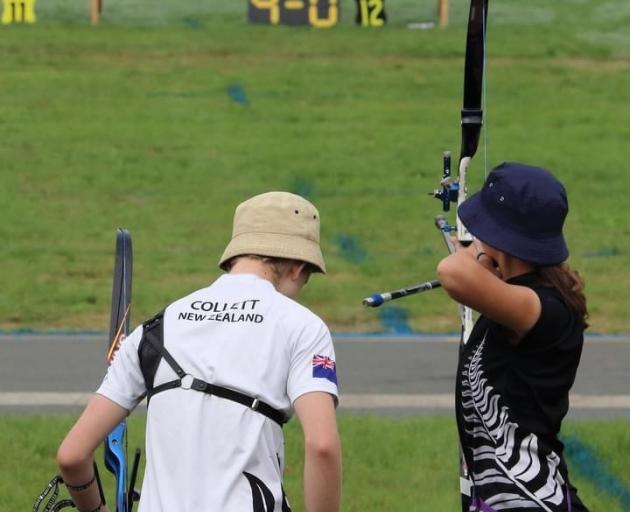 Zoe is a year 12 pupil at Mount Aspiring College. Her chosen sport is archery, which she loves. She enjoys being in her own headspace and focused. She also has been able to make a range of new friends she has met from doing competitions. Zoe first started archery six years ago and since then has travelled all over New Zealand to compete, but mainly competes in Auckland. Zoe trains five to six days a week depending on when she has a competition. After a successful year in 2021, when she placed in the top three in multiple events, we are looking forward to seeing how she goes this year. — Estelle Gellatly (sports committee member) Interview with Lucy Eason, who is a year 10 pupil and avid equestrian eventer.

1. When did you first start riding and do you remember your first competition?

I started riding when I was 18 months old on a miniature pony called Jam and competed in my first A&P show around the age of 4 but had already been attending Tapanui pony club and gymkhanas prior to that.

2. What do you think it takes to be a good rider?

A good rider is someone who is passionate about their horse’s welfare and is always prepared to dedicate time to their horses no matter what the weather conditions. You are always learning as a rider. It’s also about understanding a horse’s body language and building that connection between you and the horse.

Competing in Springston Trophy in 2021 as a draft rider or competing in the South Island show jumping championships.

4. What do you love the most about equestrian?

The amazing atmosphere in the equestrian circuits and the friendships I have made along the way. 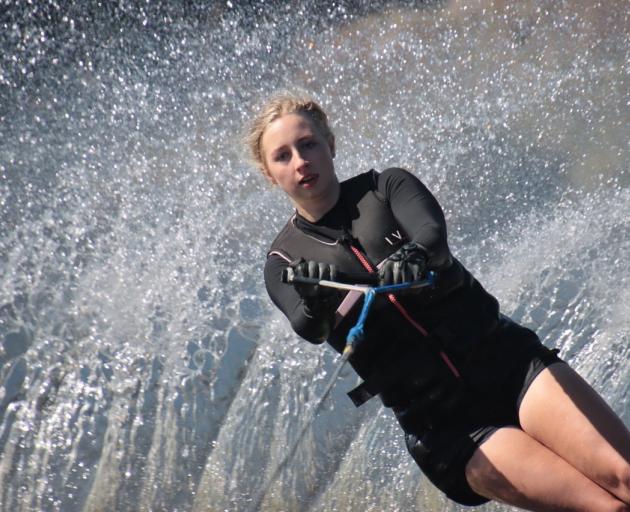 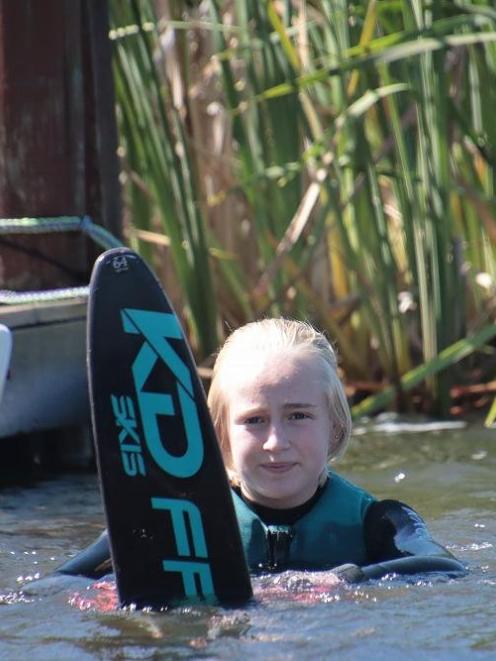 Aoife Sievwright awaits her turn at Perkin’s Pond.
The Otago-Southland secondary schools slalom water skiing championships is an annual event that caters for novice single skiers having their first go at slalom skiing, right through to competitive slalom skiers. Columba pupils Aoife Sievwright (year 9) and Phoebe O’Donnell (year 12) both competed in the novice division at Perkin’s Pond (Millers Flat) recently. Coaching is available across the day and the technical improvements noted in athletes competing is always a highlight. We shine a light on these amazing athletes who participate for the sheer enjoyment and personal development. Phoebe won the closely contested under-16 novice girls division this year, and came away from the event as the most improved skier. Aoife won the under-13 novice girls division with her best run rated better than all those in the under-13 novice boys division. Good to see female athletes flying high in their field.

Year 9 pupil Bobbi Fleming-Wilson has achieved success on the world stage for her participation in CrossFit, a recreational activity that has a strong following both in New Zealand and internationally. She started her involvement as a 4-year-old watching her mother compete, and began competing herself when she was 11.

For the past few years, children and teens have been encouraged to join the CrossFit Cub Games with a worldwide online submission platform. Bobbi participated in the 2021 event and entered five disciplines as a scaled athlete (10-13yr age group). Coaching and judging was done under the watchful eye of third-year physiotherapy student Louise Richards. Bobbi ended up placing eighth in the world.

Bobbi’s biggest achievement of the games was her 46kg 1RM front squat. She has found her experience to be a great basis for mental toughness and a wonderful grounding experience to know you always have room to grow. — Gretchen Beardmore (Columba College sports administrator)