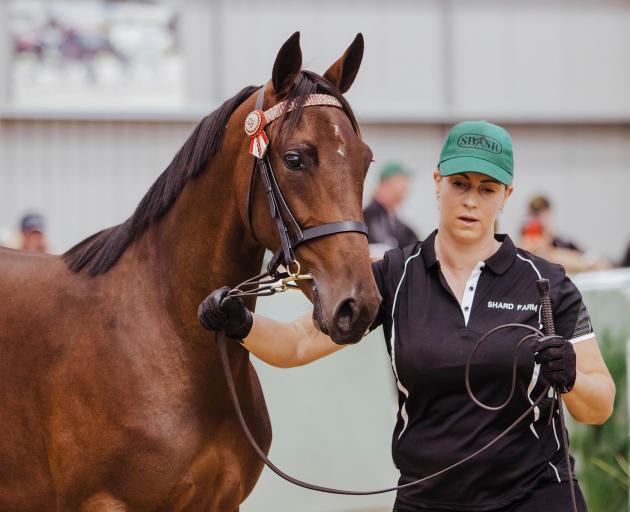 Yesterday’s $280,000 sale-topping yearling, by Bettor’s Delight from Pemberton Shard, goes through the ring in Christchurch. Photo: Supplied
Champagne flowed as southern-bred stock conquered all at the national standardbred yearling sales in Christchurch for the second consecutive year.

A filly by Bettor’s Delight from Pemberton Shard fetched $280,000,

emabling Invercargill breeders Mark and Debbie Smith to lead the pacing sale at Christchurch twice in a row. They they shared top honours with Otautau breeders Dave and Dawn Kennedy last year.

The natural thing for Moet Shard’s breeders and new owner to do was to celebrate the sale by toasting the filly with the champagne after which she was named.

The Smiths could have started celebrating only seconds after their yearling entered the ring. Moet Shard reached her reserve with her first bid.

“Normally you set a reserve and you hope for the best, but for her to get it straight away was just incredible,” Mark Smith said.

“We couldn’t believe it.”

The Smiths had watched on as former Southlander Tony Barron and his partners achieved a $280,000 sale on Tuesday. Little did they know they would be in the same position less than 24 hours later.

“We were very appreciative with what Tony Barron did yesterday with his trotting yearling out of Queen Kenny,” Smith said.

“We went over and congratulated him straight away, becuase we know exactly how hard
it can be and what an amazing result it was.

“We never would have dreamt that we would have been in the same position a day later.”

The Smiths were hopeful of getting a solid price after leadingCanterbury veterinarian Lindsay Colwell inspected their filly.

“Lindsay told us she was on a lot of the big buyers’ lists, so that gave us a bit of confidence that she might go for good money,” Smith said.

The Smiths were quick to acknowledge their staff.

“Our staff at home at Shard Farm and the couple of girls from Canterbury that helped us were just amazing. Without them it just wouldn’t be possible,” Smith said.

McClintock, a Cheviot farmer, dived head first into the sales arena. The mammoth outlay was his first for a horse at a yearling sale.

The Smiths and Prices are part of the Southern Bred Southern Reared organisation, which Mark Smith chairs.

“As a group we had some outstanding results,” he said.

“We will just keep attacking. We will be back next year and we will try and make it even bigger and better.”

A total of 16 yearlings were sold to southern buyers over the two days of selling in Christchurch.