Series star Ultimate Sniper (11) has been devastating in two jaw-dropping wins in his first two heats of the series.

The step up to 2700m and striking the easier of the two pacing heats put him in an even better winning position than before his first two sensational wins.

The bigger questions for punters to answer is who will run second and third.

Chase Auckland (1) has the draw to put himself in a prime position to run in the top three.

His runs so far in the series have not been spectacular, but the strength of this field and the ace alley make him a clear second pick.

Ashley Locaz (7) also underwhelmed on night two after making his second poor start of the Interdominions.

If he is at his best, he runs third here.

Fourth is a battle between Australians San Carlo (10) and Colt Thirty One (2).

This is undoubtedly the trickiest of tonight’s heats to analyse.

I am going to stick my neck out and say Habibi Inta (2) will bounce back to his best, mainly because he returns to 2700m.

Two factors mean he has underperformed in the series so far.

Firstly, the two sprints trips on the first night.

Secondly, trainer Paul Nairn has had to manage the horse’s recovery from his epic Dominion win.

As the saying goes they are only horses, not motorcars — they cannot be at their absolute peak for weeks on end.

I have marvelled at the way master trainer Barry Purdon has managed the campaign of Marcoola (8).

We have not seen the often hot-headed trotter out there breaking on nights one and two.

Purdon is plotting a path to peak the horse for the final.

Paramount King (6) has been the breakout star of the series.

He was brilliant on the first two nights and must go in my top 3.

Temporale (4) picks himself for fourth, just ahead of Tough Monarch (1).

Thefixer (4) has been brilliant in defeat, hitting the line powerfully in his first two heats.

It’s been a huge turnaround from his poor New Zealand Cup carnival.

The All Stars pacer gets every chance to show off his return to his best when starting from barrier 4 in this heat.

Cruz Bromac (2) has also been excellent in both of his heat runs and will not be easy to get past.

In a tough choice, I have gone for Thefixer, just on the way he has attacked the line on nights one and two.

The two All Stars horses have the draws to dominate, which will make it hard for A G’s White Socks (10) to make it a clean sweep of the heats.

I am sure he will go another great race, but he is likely to get into a tough spot to win.

Bling It On (6), Classy Brigade (12) and the terribly unlucky Another Masterpiece (8) look next best.

Oamaru trotter Majestic Man (9) has been phenomenal in the series so far.

Stunning on night one with his whirlwind finish and even more impressive when running away from a high-class field on night two.

Winterfell (6) must go in after his night one win and his unlucky run on night two.

He needs to settle better in the running though, which is why his short odds do not look appealing.

Massive Metro (5) and Destiny Jones (1) are the two horses in his heat who should relish more distance.

Massive Metro has been very good over unsuitable distances in his first two heats.

Destiny Jones has been too and can bounce back from he poor staying efforts at the New Zealand Cup Carnival, where she was struck down by an allergy. 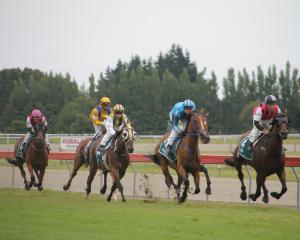