Turn it up! Melbourne Cup comes to town 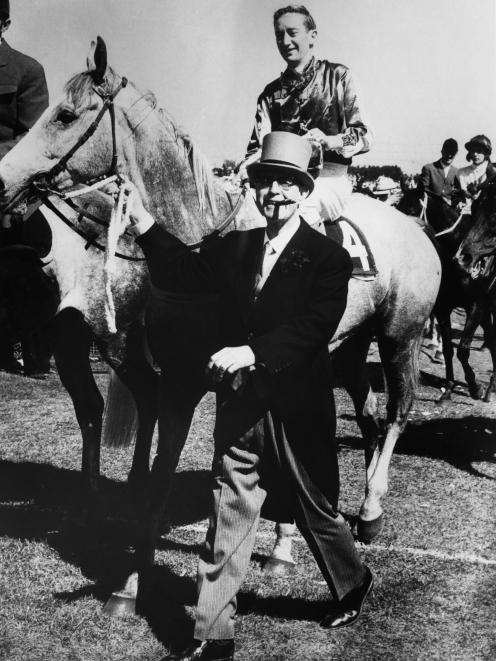 Racehorse owner E. C. S. Falconer leading his horse, Baghdad Note, ridden by jockey Midge Didham after their win in the Melbourne Cup in 1970. Photo: Getty Images
The greatest prize in Australasian racing — the Melbourne Cup — arrives in Otago this afternoon. Racing writer Jonny Turner reflects on his favourite cup moments and those that have had the biggest impact on New Zealand and Otago racing.

How could any self respecting New Zealander put any other Melbourne Cup win ahead of Kiwi's 1983 victory?

The quintessential tale of his last-to-first victory for Taranaki farmers Snow and Anne Lupton etched a mark in New Zealand popular culture that has ensured his win lives on.

Very few race wins of any kind have transcended the sport like Kiwi's incredible victory did.

So, he simply must be No1 on this list.

Damien Oliver touched the hearts of racing fans when riding Media Puzzle to win just days after his brother, Jason, was killed in a race fall.

Oliver, who rode in his brother's white breeches, showed incredible poise to produce a brilliant ride under the most trying of circumstances.

Media Puzzle's win transcended racing, but in a much different way to Kiwi's victory.

It is hard to imagine there will be another Melbourne Cup victory with the raw emotion of 2002 any time soon.

Baghdad Note's win is arguably the most impressive feat notched by a horse trained in the Wingatui and Taieri region.

The area has contributed so much to Australasian thoroughbred racing that it was due reward when the cup was sent here courtesy of Baghdad Note's win.

Though he was not written off before the event to quite the same extent as Kiwi, and his win was not as impressive, some parallels can be drawn.

Despite running third equal in the Caulfield Cup, Baghdad Note was dismissed as a wet-track horse who was not up to winning the great race.

A pinpoint ride from Midge Didham showed how very wrong that assessment was.

Race-caller Greg Miles produced arguably the most poignant piece of commentary when he said "A champion becomes a legend" when Makybe Diva approached the winning post to score her third consecutive cup win.

No horse had ever won three Melbourne Cups in a row, and it is almost unthinkable that it will ever happen again.

The combination of Glen Boss' pinpoint riding and Makybe Diva's explosive finish made them arguably the greatest pairing in cup history.

Despite footage of Phar Lap's win being in black and white, full of static and barely audible, it is one of the most replayed pieces of cup vision in history.

The horse dubbed "Big Red" did not just win - he absolutely crushed his opposition.

The sight of jockey Jim Pike haunched perfectly over Phar Lap's shoulders as he jogged to the finish is beautiful to watch.

Phar Lap had a bigger impact on popular culture than Kiwi, but that was owing to the breadth of his incredible career. So he must settle further down the list than his New Zealand-bred counterpart.
Honourable mentions:

1993: Vintage Crop - The Irish galloper was the first northern hemisphere-trained winner of the great race.