'Amazing year' as Strack moves into the fast lane 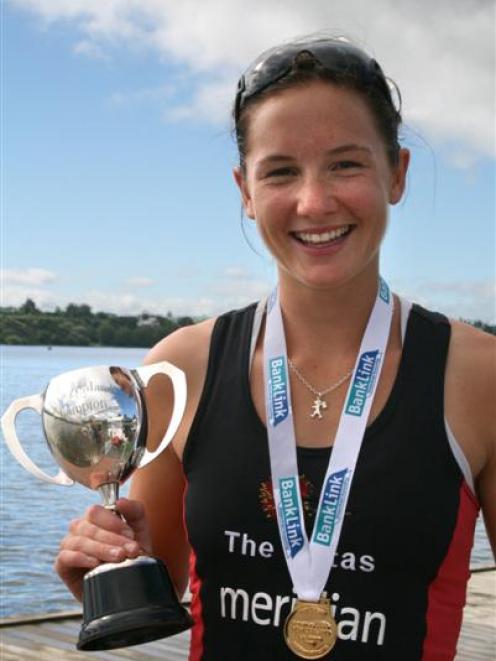 Lucy Strack
This is the fourth of a series of articles by Alistair McMurran on the World Rowing Championships, which will be held at Lake Karapiro from October 31 to November 7.

It was a waste of time because she now has free entry.

Strack (20) and partner Julia Edward were selected for the champs in the lightweight double sculls after finishing runner-up to Greece at the world under-23 championships in Belarus in July.

When she started rowing as a pupil a St Hilda's Collegiate in Dunedin, Strack entertained vague hopes of competing in the Olympics one day.

The goal is now within her reach.

"It's been an amazing year," Strack said.

"Things have happened so quickly. I just have to keep performing to get to London."

Life has changed dramatically for the North End club rower as she has moved into the fast lane of the sport.

She will be tested at Lake Karapiro next week.

Strack's rapid rise up the rowing ladder has taken her far from where she was at the start of the year, when she bought her tickets to the champs.

"I bought tickets with Dad to watch the championships," Strack said.

"I wanted to get a seat in the grandstand."

Her ticket is now surplus to requirements and Strack has given it away to her sister Kate (26).

Strack will be backed at Karapiro by her parents, Mick and Mary, as well.

They went to Belarus to watch the under-23 championships.

She will also have support from friends from Dunedin and Christchurch.

"There has been an amazing home support," she said.

Strack is studying in Christchurch but still races for the North End club in Dunedin and has the club's backing as she prepares for the world championships.

In Brest, Belarus, in July, Strack and Edward finished second in 7min 30.95sec, slightly more than 2sec behind the Greek winners.

"I've always had the Olympic dream."

"But I didn't really believe it. I do now because things have happened so quickly."

The double sculls training has stepped up a notch since Strack and Edward returned from Belarus.

"Our training sessions have been of a higher intensity and longer," Strack said.

"It's a huge step up to the elite grade from under-23 and we have had to adapt our training to meet the challenge."

Their coach, Gary Hay, has been pushing the crew to limits they did not think possible when they prepared for Belarus.

"At elite level the times are faster and we have to be a lot more explosive in our racing to match the other boats."

They are now paying closer attention to nutrition and the finer points of the sport.

The heavier workload has not phased Strack.

"No, definitely not," she said.

"We have a great atmosphere and I'm loving it. It's so cool to be racing in world-class company."

The silver medal in Belarus has given Strack and Edward confidence.

"We know we are right up there at international level," Strack said.

"We just have to make the next step up to the elites."

Strack knows reaching the podium at Lake Karapiro next week will be difficult.

"But everyone is even when you line up at the start. We will give it a real go," she said.

"Some of the crews have been together for a long time and have competed at the Olympics. We will just focus on ourselves and what we can do."