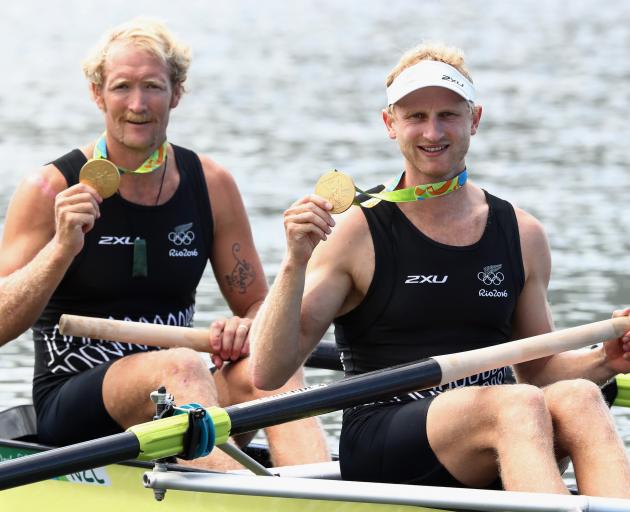 Eric Murray (left) and Hamish Bond celebrate winning the gold medal in the men's pair at the Rio 2016 Olympic Games at the Lagoa Stadium in Rio de Janeiro, Brazil. PHOTO: GETTY IMAGES
Next week marks 20 years since New Zealand’s flop at the Sydney Olympics. Reporter Adrian Seconi asks whether the half a billion dollars pumped into high-performance sport in the years since has paid off.

Sydney was the prime-time Olympics in which we bombed.

No need to stay up late. No getting up early. You could not sleep your way through it.

In 2000 the disappointment soaked in as we choked down our lunch. The frustration grew as we picked at our tea. And by breakfast New Zealand had slipped further down the medal table.

By the end of the torturous two weeks we knew the words to Advance Australia Fair and to this day the catchcry "Aussie, Aussie, Aussie" is forever burned into our psyche.

But for a country that prides itself on its sporting prowess, Sydney was a giant letdown and a problem for administrators to solve. The solution was to increase funding and to tag it to Olympic success.

Three times as much was spent on Athens in 2004. That $32 million netted five medals.

Sport New Zealand upped the ante for Beijing, pouring in $42 millon, and was rewarded with nine medals.

The pot was increased to $62 million for London and we scooped 13 medals.

Those 18 little medals went ka-ching, ka-ching all the way home.

It was a record haul, matched by a record spend.

The meter is still running for Tokyo but the final statement will include a very sturdy bottom line expected to be about $250 million.

That means, since Sydney, the country will have spent more than half a billion dollars.

So was it worth it?

University of Otago professor Steve Jackson has made a career out of grappling with these types of curly questions. He specialises in the socio-cultural analysis of sport.

"One of the arguments for the investment in elite sport is that these medals translate into greater participation rates, which then improves the overall health of the nation," Jackson said.

"But there really isn’t any evidence of that. And there is very little evidence of that in any country where there is a sustained increase in participation levels when you win at certain sports."

Jackson said there was no question the disappointing results at the Sydney Olympics prompted sport administrators "to take a good look" at high- performance sport, just as Australia did after the 1976 Olympic Games in Montreal.

"That was the tipping point for them and the establishment of the Australian Institute of Sport subsequently. And of course we know they are very successful."

If we have learned anything from Sydney, it is that the country does not enjoy the absence of success. What we lacked in medals we made up for with angst.

Of course, the down side of tying funding to success is you deny athletes access to taxpayers’ funds.

"Do you invest in the trickle-down or do you adopt a grassroots-up model. Sport New Zealand would argue ... you can do a bit of both.

"But it can be a very complicated formula and you have to remember you are up against some countries where there is no limit on what they will spend.

"What you see over 20, 30 and even 40 years [in New Zealand] is it goes in cycles and it is related to government politics and sometimes the mood of the nation in terms of how much governments are willing to spend."

National identity and pride — so often associated with sporting success — are awfully woolly and difficult to measure, yet appear to inform the rationale behind a lot of the funding.

But it is perhaps when you flip the argument you get a clearer sense of what value people really place on sport.

"What happens if your team doesn’t win?

"I’m not sure I’ve seen any national protests because they want more money because their team is not succeeding.

"The prime example is people did not stop going to watch the All Blacks or supporting them when they failed to win a World Cup [for 24 years]."