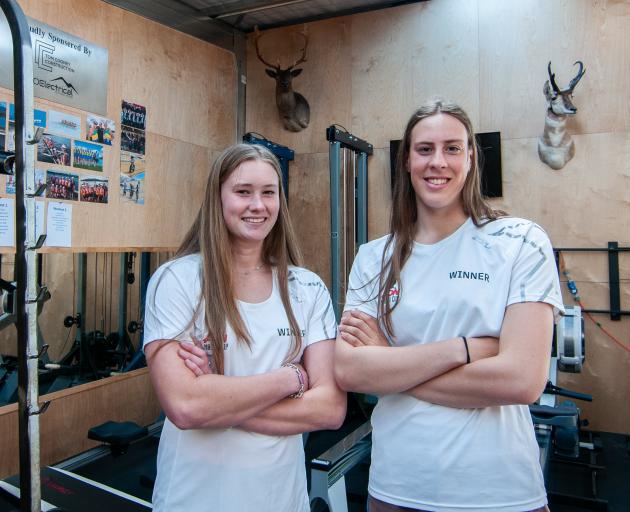 Dunstan High School rowers Sophie Smith (left) and Mackenzie Ealson take a break from training in the gym in Alexandra after committing to universities in the United States. PHOTO: SHANNON THOMSON
They will find you if you are good enough.

It is one of those old sayings that sometimes feels like just that — a motivational cliche.

But Dunstan High School 18-year-old duo Mackenzie Ealson and Sophie Smith are proof there is something to it.

It is hard to imagine somewhere further from the big cities and universities of the United States than Alexandra and Lake Dunstan.

Yet that is where two of the top American rowing colleges came looking for new recruits.

Ealson has committed to Yale University, where she will join fellow Otago rower Eva Hofmans in Connecticut in the northeast.

For Ealson, it came as an opportunity to row at a high level, as well as getting a top degree.

She would study ecology and evolutionary biology at one of the world’s most renowned academic universities.

It is also a top rowing school and has a rivalry with its fellow Ivy League school, Harvard University.

‘‘I really like the culture that their team had,’’ Ealson said, having received some insight from Hofmans.

‘‘It’s an amazing university and I knew I’d get an awesome education and have an awesome time rowing with them.’’

She began rowing as a year 8 pupil when Dunstan coach Simon Smith worked with her mother and thought she would make a good rower.

Since then, she has won nearly everything there is to win nationally and formed a devastating combination with Paige Furrie, gold medals in the double and quadruple sculls at this year’s Maadi Cup being her highlight.

Smith had her first contact from LMU over Instagram following her gold in the single sculls at the Maadi Cup.

The college sent her a message and set up a Zoom call so she could learn more about the school.

She had interest from other universities, but decided the combination of rowing and academics at LMU suited her.

‘‘Ever since I heard about rowers going to the US, I’ve always thought it would be really cool, going somewhere new and rowing. I’ve always loved the idea.’’

It was the culmination of a big year for Smith, who moved to Alexandra from Dunedin to further her rowing at Dunstan.

‘‘I definitely haven’t regretted moving up here for one second. I’ve loved every minute of it.

‘‘It’s made my rowing so much better and it’s pushed me.

‘‘I’ve made lifelong friendships with some of these girls.’’

Dunstan coach Simon Smith was thrilled with the duo’s success.

He said the school had previously had rowers with the opportunity to go to the US, but these were the first two to take it.

‘‘They’re both great kids, easy to coach, and they have big goals. I’ve really enjoyed helping them achieve those goals — Mackenzie, especially.

‘‘ I’ve only had Sophie this past season, and she’s had an amazing year. But Mackenzie, I’ve had her since she was 13 and she’s been successful every year.

‘‘They just both work hard. They’re honest and put the effort in.’’

They will complete their school year at Dunstan and remain in New Zealand, before heading to the US in the middle of next year.