All Blacks edge past Argentina in tense clash 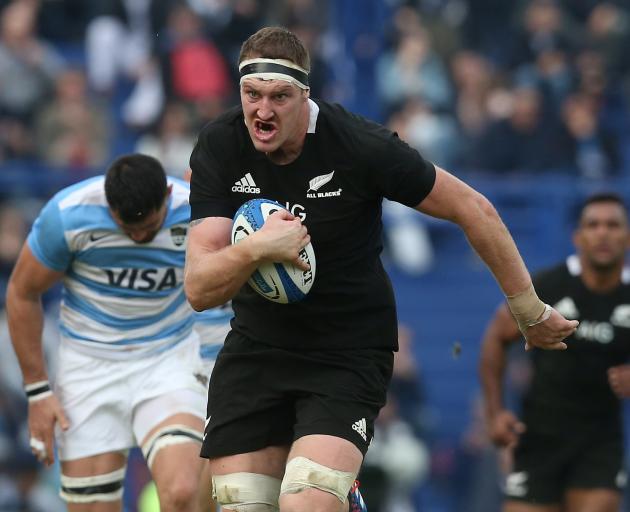 Brodie Retallick on the charge to score the second try for the All Blacks. Photo: Reuters
The All Blacks have survived their first test of the year with a 20-16 victory over Argentina in Buenos Aires which could easily have been a defeat and perhaps should have been.

At the end they were clinging on at Estadio Jose Amalfitani and greeted referee Angus Gardner's final whistle with huge relief after escaping two attacking lineouts in the final seconds.

The Pumas will rue their missed opportunity for they have never beaten the All Blacks and won't get a better chance for a long time.

The All Blacks were missing all of their Crusaders players, apart from debutants Sevu Reece, who started on the right wing, and replacement back Braydon Ennor, and that lack of quality and experience showed in the second half as the visitors were held scoreless.

The Pumas appeared fatigued in the first half and looked out of it at halftime, but a converted try to Emiliano Boffelli after the break changed the dynamic of the match. If first-five Nicolas Sanchez had kicked a relatively easy penalty soon after the All Blacks would have been in even bigger trouble.

"It was the definition of a test match, a real ding dong battle," skipper Sam Cane said straight afterwards. "They came out firing and I thought our discipline was poor at times. But massive credit to Argentina, they put us under pressure from the first whistle to the end of the game."

The All Blacks were loose at times with their handling and concession of silly penalties, and questions may be asked about an overly elaborate attacking move on halfway with three minutes left which handed possession back to the home side.

But their defence was outstanding, with Aaron Smith, Beauden Barrett, Brodie Retallick and Ardie Savea leading the way, and it's that grit and desperation to hold out a fast-finishing team in a hostile environment which should please coach Steve Hansen the most.

"We found out a lot of things and most of them are pretty positive," Hansen said. "That was pleasing. We knew we'd be rusty and we were… most of them put their hands up."

The All Blacks were in control at halftime after scoring two converted tries via Ngani Laumape and Brodie Retallick. They showed variation on attack and a depth and breadth of game which appeared on a different level to the Jaguares-laden Pumas, who brought line speed and intensity on defence, but not too much in the way of creativity.

They did earn their successes, though, all via the boot of first-first Nicolas Sanchez and Emiliano Boffelli, the latter a penalty from halfway which easily cleared the crossbar.

But they couldn't sustain it – in fact, they fatigued very quickly - and once the All Blacks ironed out the wrinkles in terms of a few handling errors and turnovers, it just got worse for the Pumas because the visitors were relentless and there were no more so than No8 Savea, who troubled them constantly with his pace.

In their first test of a World Cup year, the All Blacks showed subtleties in terms of their kicking game in particular as they sought to find space but there was nothing subtle about their first try scored by Laumape, who was direct as usual and grounded the ball on the line amidst a pile of bodies.

With Barrett continuing to kick perfectly from the tee, and Brodie Retallick gifted an intercept try from nearly 50m out from first-five Nicolas Sanchez, the Pumas were in big trouble at halftime.

But it was all change at halftime. Boffelli was over from a Sanchez bomb, and the Pumas enjoyed all the possession and territory.

As the All Blacks brought on newcomers such as Luke Jacobson, Atu Moli, and Ennor despite the tight circumstances, the home side couldn't find the killer blow, and that may haunt them for some time.