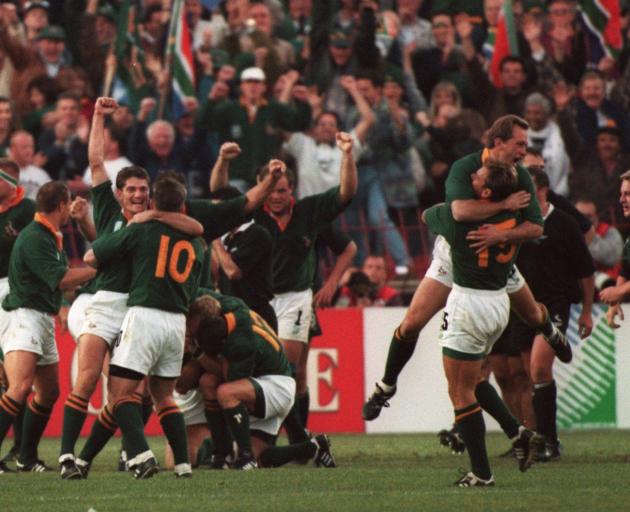 The Springboks celebrate winning the Rugby World Cup exactly 25 years ago. PHOTO: GETTY IMAGES
It is 25 years today since the All Blacks lost the Rugby World Cup final in South Africa in extra time. It was a win clouded in controversy, with the All Blacks hit by illness in the days before the game. Rugby writer Steve Hepburn catches up with coach Laurie Mains and his memories of the fixture.

Laurie Mains admits every time he watches a rugby match the bad memories come up.

Mains, who coached the All Blacks at the World Cup, admits he is not over losing the 1995 World Cup final in Johannesburg to the host nation. It still grinds at Mains that South Africa managed to beat his side in extra time in the final, with a Joel Stransky dropped goal winning the match.

"I know speaking to Sean [Fitzpatrick] — and he said to some documentary makers — every day he thinks about it. With me it wouldn’t be the same, but every game I watch, it will cross my mind.

"It would be my worst loss by a long way. Perhaps if we had played at our best and lost then sure, it would have been disappointing, but I would have been able to cope."

Mains and the team was hit by food poisoning on the Thursday before the match and that led to it being very sick on the Friday and still under the weather on the day of the match.

The players were nowhere near their best in the game, with the likes of Jeff Wilson leaving the field and vomiting on the sideline.

The sickness was blamed on everything from a rogue waitress called Suzie, bottles of peri peri sauce and eating seafood at a restaurant. Mains said nothing could be proved.

A private investigator Mains employed did locate a waitress who worked at the hotel the week of the final, but Mains said the name Suzie was manufactured by a journalist. The sauce was given to the players after the final and the team never ate seafood at a restaurant.

Mains said the lunch at the hotel on Thursday was probably where the food poisoning occurred, but whether it was deliberate or an accident no-one would ever know.

"On the Thursday we went out as a management team for a meal and when I came back I saw Zinny [Zinzan Brooke] in the foyer. I took one look at him and knew something was up. He said everyone was up with the doc. That is when it started. We were all crook. I was crook. Colin [Meads] spent the next day in bed.

The side did not have a full captain’s run, just a walk around Ellis Park, the day before the game.

"I have no doubt if we were at full fitness and everyone was healthy we would have won the game. We were the best team at the World Cup, but we were nowhere near our best.

"We played a new brand of rugby that we had been working on for months . . . but you had to be very fit to play it and the guys were all crook."

He said there had been discussion among management to ask to postpone the game but it was never going to be allowed.

South Africa’s win was hailed as a uniting moment for the nation and has been made into films and documentaries.

Mains, though, said that gave him no pleasure.

"I did meet Nelson Mandela a couple of times and he was a great guy. But no, there was no satisfaction from that at all."