Moody on Ireland: 'we owe them one' 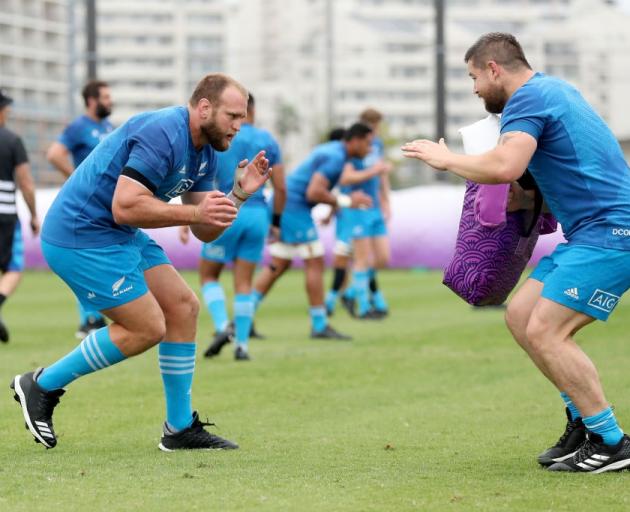 All Blacks prop Joe Moody prepares to make a tackle in training against Dane Coles. Photo: Getty Images
Reactions come in many forms.

With the All Blacks, often the most visible come following rare defeats.

A World Cup quarterfinal, the notion that it's win or bust, is more than enough to sharpen focus this week.

But the fact Ireland have won two of the past three tests against the All Blacks, including their last meeting in Dublin in November, adds that bit extra for some such as loosehead prop Joe Moody.

"A little bit in the back of your mind it just reminds you that we sort of owe them one," Moody said.

"At the same time, it's not something we dwell on or focus on. They have got a couple up on us in recent history but at the same time it wouldn't matter who you play this week we have to win."

Eleven months have passed since that 16-9 defeat in Dublin, almost three years since the first ever loss to Ireland in Chicago. The All Blacks say they haven't touched on either this week. They probably don't have to.

For those involved, defeats aren't easily forgotten. During Steve Hansen's tenure the All Blacks have never lost to the same opposition twice in succession.

At the end of test seasons, Hansen refers to defeats as rocks under beach towels over summer.

Whether it's next week, next month or next year, whenever the All Blacks next meet that same opponent, the defeat is a trump card he can play to spark a reaction, if necessary.

Whether Hansen or captain Kieran Read go there later this week is somewhat of a moot point.

Come kickoff in Tokyo this Saturday night, subconsciously individuals within the All Blacks, those burnt by Ireland before, will want victory that little bit more. It's only natural.

No matter how much the All Blacks analyse victories, nothing replicates that feeling in the pit of the gut, the hurt and frustration, the hunger to put it right, like defeat.

Four years ago the All Blacks spent the week saying Cardiff, 2007, was irrelevant – and they then produced one of their best World Cup performances to thump France 62-13 at the same venue.

Ireland are a much better opponent than the French team of 2015. But that same inherent desire will be present for many, and that can only help drive the intent to bring a menacing mentality this week.

When two sides with the quality of the All Blacks and Ireland collide, attitude can make all the difference.

In recent times this aspect was clear in the record loss to the Wallabies in Perth, and the subsequent response the following week at Eden Park, when the All Blacks returned the favour to serve revenge in the form of their 36-0 triumph.

As All Blacks hooked Dane Coles explained, embracing the attitude from Eden Park shouldn't be a problem this week. It's a quarterfinal. And it's Ireland.

"It's very important we do bring it this week because if we turn up like we did in Perth we'll be going home. It's up to the individual to go to that place he needs to. If we don't bring that for a quarterfinal against Ireland, it's not on. I'm pretty sure the boys will go to that place they need to so they turn up with the intent and energy for Saturday."

As for Ireland, Coles wasn't quite as emphatic about settling scores.

"I hope it doesn't happen again to be fair. For me personally it's important we don't look back. World Cups are different. They get the same amount of respect from having knocked us but it's very different being in a World Cup.

"So far we haven't really talked about what happened in those previous occasions. They might take a lot of confidence out of it but we know we're playing Ireland in a quarterfinal and that's all we can do."