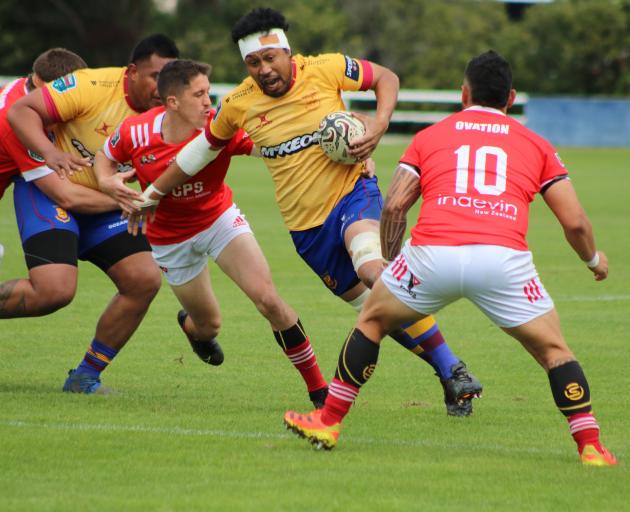 That is the only way to describe how North Otago held on by the skin of its teeth to beat Poverty Bay 12-10 in Oamaru on Saturday.

The Old Golds gave away a penalty just outside their 22m right on fulltime, forcing Poverty Bay first five Kelvin Smith to step up for his first kick of the day.

Smith, who was greeted with some rambunctious noise from the North Otago Rugby Supporters Club, pushed the kick too far left, much to the delight of the minimal home crowd, awarding North Otago its second win on the trot.

While North Otago held the lead for the majority of the match, it was far from an easy win.

A yellow card to prop Tristan Fuli in front of the posts allowed fullback Andrew Tauatevalu to put Poverty Bay in front 3-0. However, the visiting side was unable to exploit North Otago being down a man, spending most of the time camped in its own 22m.

North Otago turned down two easy shots at goal, and opted for lineouts that did not pay off, but Poverty Bay loose forward Keanu Taumata was sent to the bin as well.

Soon after, a dominant scrum when Fuli was back on the field resulted in No8 Charles Elton — called into the North Otago squad this week after playing in the 2019 Meads Cup-winning team — picking the ball up and going under the sticks, giving North Otago a 7-3 lead.

The home backline, led by fullback Levi Emery, looked threatening when it was given space and the ball, but an inability to execute in several situations meant squandered opportunities for the home team.

After the break, Poverty Bay came out with intensity and ball speed, forcing North Otago do defend for multiple phases.

In a freak series of play, Emery made a beautiful break through the middle, and punted the ball down the field for centre Hayden Todd to pick up.

Todd was tied up by the defence but somehow managed to tap the ball forward for loose forward Toni Taufa to score.

It gave North Otago the biggest lead of the day at 12-3, until mammoth Poverty Bay replacement prop Jarryd Broughton bustled his way over the line to score his team’s only try.

Poverty Bay was good at pulling together phases for long periods of time, shown in the last five minutes of the game, but North Otago was equally as good at defending its line.

Defence was ultimately what won the Old Golds the game.

The coaches will be happy with their team’s strong defensive effort, several lineout steals, and big scrums in the first half.

However, North Otago’s injury woes continue. Winger Levi Helleur-Atiga left the field early in the first half, and replacement loose forward Mosese Aho was stretchered from the field following a nasty clash at the end of the game.

North Otago will need to string together an 80-minute performance this weekend, taking on arch-rival South Canterbury in Oamaru.

Top-of-the-table South Canterbury made it four wins on the trot, beating East Coast 34-12 on Saturday.

Horowhenua-Kapiti defeated Buller 27-12, Thames Valley downed West Coast 27-8, and not even All Blacks captain Sam Cane, who played an hour, could solve King Country’s woes, as it was beaten 48-13 by Whanganui.