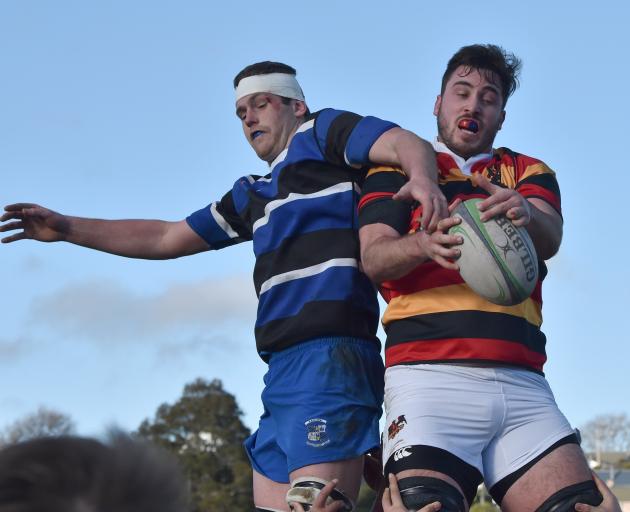 Kaikorai lock Zach McKenzie contests the ball which Zingari-Richmond’s Keegan Anderson has secured during a premiership match at Bishopscourt on Saturday. PHOTO: GREGOR RICHARDSON
You might say Craig Sneddon has done the rounds.

A utility back, he played for Pirates, Harbour and Southern. After he retired from playing, he popped up at Alhambra-Union and coached for three years.

You may have spotted him with a whistle as well. The 33-year-old student teacher refereed to premier colts level in 2015 while he was still playing.

Sneddon also played senior cricket for Taieri, Kaikorai and had one season at Carisbrook-Dunedin.

He’s a very versatile chap. In his latest incarnation he’s head coach of Zingari-Richmond where he hopes to build on the work of his predecessor and help change club culture.

Sneddon quietly replaced Karina Nafatali during the hiatus for Covid-19.

Nafatali stepped aside for family reasons and Sneddon was happy to step in.

"I always back myself and I’m excited," he said.

"But it is different. We are trying to change a few things up at Zingari and Nafa started laying the platform for that last year and I’ve got on board.

"We are probably not the most celebrated team in town, so it is getting the boys to get a bit of belief and that really."

The Colours have started the season with a couple of losses but Sneddon feels like there has been some progress.

"We’ve been getting 30 guys to training and the spirits are still really high. And I think they know we’ve actually got some reasonably good rugby players."

Sneddon felt the 41-0 defeat by Kaikorai at the weekend did not paint an accurate picture of the contest.

His side trailed 10-0 at halftime but had dominated the majority of the opening 40 minutes.

"I think if we’d have come out and scored after halftime it might have been a different game. And also if we had have scored in that first 25 minutes we could have taken confidence.

"We have to take our opportunities. We have a moment and we don’t score. We’ve got to take those moments."

Sneddon is ambitious about his coaching. He coached the Otago under-16 side last season and wants to "go as far as I can".

"I just enjoy helping people to be honest and to give guys a chance to help improve their game."

Zingari-Richmond will host Harbour at Montecillo tomorrow. The Hawks have had a mixed start to the season and have not looked as strong as in the past few seasons.

Alhambra-Union’s upset win against Southern last weekend will have inspired a team like Zingari-Richmond and is perhaps an indication of how even the competition is shaping this season.