He is two months away from turning 40 but he remains one of the most dynamic players on the Central Otago premier club rugby scene, and he will be out for revenge when Arrowtown takes on the Cromwell Goats at Jack Reid Park tomorrow.

Aidan Winter was the player-coach when Arrowtown last defeated the Goats, in the grand final way back in 2019. Since then, the Goats have downed the Bulls five times in succession. 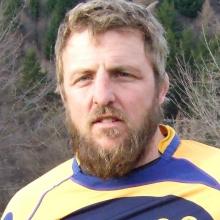 That is a source of obvious frustration for a man who has made more than 200 appearances for Arrowtown.

Some thought Winter would have faded from the scene by now, but he reminded everyone what a valuable impact player he remains after coming on as a substitute in Arrowtown’s recent White Horse Cup challenge against Upper Clutha at Wanaka.

Arrowtown was down 19-6 at the time but two grand forward tries, one by Winter, made it 18-19, causing alarm in the Upper Clutha camp. They hung on desperately for the win.

Winter’s performance that afternoon has seen him elevated to Arrowtown’s starting XV by coach Simon Harper, who says the veteran brings ‘‘impact and experience’’ to the team.

It has been a frustrating stop-start season for Harper. The clubs are five weeks into the competition and Arrowtown has yet to take the field at Jack Reid Park.

Following away fixtures at Omakau, Alexandra and Wanaka, the team was defaulted to by Covid-struck Maniototo last weekend.

Wintry conditions, including snow to low levels, are forecast for this weekend, which will add an extra challenge.

This is a match Harper dearly wants Arrowtown to win because he says qualifying as one of the top two teams is all-important.

Who will handle the goalkicking duties for the Cromwell Goats — Hayden Todd, who scored a stunning 42 points (including 11 conversions) against the Cavaliers last Saturday, or Ben Maxwell, the captain who is returning to action following a knee injury? Maxwell kicked 96 points last season.

Team manager Russell Decke said the goalkicking duties were to be sorted at last night’s training.

Having lost two of their four matches, the reigning champion Goats can ill afford another defeat.

After their 32-all White Horse Cup epic last weekend, Upper Clutha and Wakatipu can relax a little this weekend, having drawn the two bottom teams.

Upper Clutha will journey to Cromwell to take on the Cavaliers, who have conceded 188 points in their past two outings, while Wakatipu is off to Omakau to tackle Matakanui-Combined, which they beat 43-8 last season.

The remaining fixture should be closely contested with Maniototo hosting Alexandra at Ranfurly, a game that presents a rare opportunity for Alexandra to play its way into the top four.