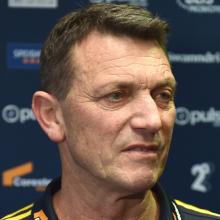 Roger Clark
The behaviour of Highlanders players who ignored requests from cabin crew to wear masks on a flight home from Wellington has been labelled "unacceptable".

Highlanders chief executive Roger Clark confirmed the allegations yesterday by a person on the flight and said he was disappointed by the behaviour.

The team was flying home on Sunday morning after its 21-14 loss to the Hurricanes.

It comes in the wake of yesterday’s revelation that Covid-19 has made its way into the squad, ahead of its match against the Blues in Auckland tomorrow.

Mr Clark said no-one on that flight had tested positive for the virus as of Monday morning.

However, the team was taking the matter seriously nonetheless and the behaviour was unacceptable.

"We’ve received the allegations and we’re taking them very seriously," he said.

"We’ve got very strict Covid protocols and we’re trying our best to keep it out of our team, let alone out of our community.

"It’s pretty disappointing that anybody wasn’t wearing a mask on the plane.

"I was on the plane as well, so I did see a couple of guys that weren’t wearing them.

"That’s something we’ve addressed and are addressing."

A person on the flight, who wished to remain anonymous, said players were walking around the plane without wearing masks and some were continually asked to put their masks on, but ignored the cabin crew.

One player was said to have walked on the plane without a mask and ignored requests to put one on.

Players were also scattered around the plane and some not wearing masks were seated next to members of the public.

Mr Clark said the Highlanders had not had been contacted by Air New Zealand over the incident.

The Highlanders yesterday confirmed there were "a few cases" of Covid-19 in the group, although declined to offer details around who had contracted the virus.

Notably, Sam Gilbert and Fetuli Paea were left out of the matchday 23 after having started each of the first three games.

The cases had not prevented the Highlanders naming a team and coach Tony Brown said it was a case of adapting and being flexible.

"I think when the guys present each morning, we’re really clear around who’s ready to go and who’s unavailable. That’s how we have to operate."