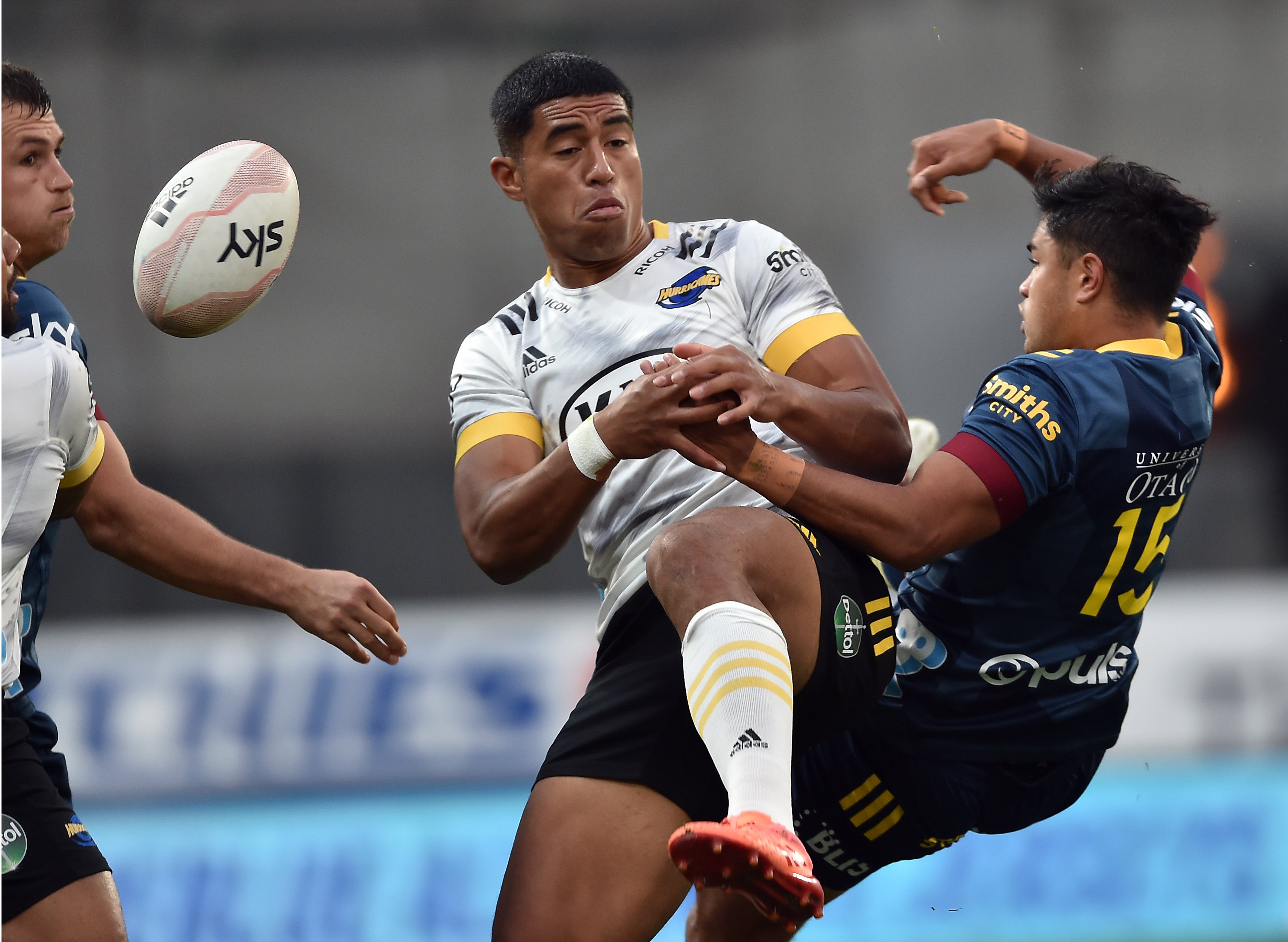 Highlanders centre Michael Collins, Hurricanes winger Salesi Rayasi and Highlanders fullback Josh Ioane compete for the ball during their sides’ Super Rugby Aotearoa match at Forsyth Barr Stadium last night. PHOTO: PETER MCINTOSH
Right, we will take it all back. Those of us who used to scoff over the hype of Jordie Barrett just got taken down a peg or 20 last night.

Sure, the big man from Taranaki was overrated a couple of years ago but he has quickly morphed into a complete footballer.

When he is on — like he was last night — the side he is playing for usually wins. And it did.

The Hurricanes beat the Highlanders 30-19 at Forsyth Barr Stadium last night for their first win of the season.

Barrett scored three tries, converted all of them, banged over two booming penalties from 50m and, right on fulltime, slotted his third penalty to help himself to 30 points.

It was a mighty impressive effort from Barrett, who was light years ahead of any other back on the field.

Jordie Barrett of the Hurricanes dives over to score a try while being tackled by Highlander Aaron Smith. Photo: Getty Images

The Highlanders had plenty of ball, especially in the first half but did not have the points to show for it. The Hurricanes defended well and took their chances when they came along.

Up 17-7 at halftime, the killer blow was landed by the Hurricanes just three minutes into the second half when Barrett went in for his third try off a nice inside ball.

That put the Highlanders too far behind and they could not hold on to the ball for long enough to get near. Flanker Shannon Frizell tried hard as did Mitch Hunt and Connor Garden-Bachop out wide.

The Highlanders were 10 points down in as many minutes at the start of the game. The side missed an easy penalty through Josh Ioane after just two minutes.

The Hurricanes answered with a big penalty from Barrett a couple of minutes later. Barrett then scored a nice try from a lineout inside the Highlanders 22m. The Hurricanes, in what must be something of a world first, spun the ball wide instead of going for a rolling maul.

Barrett managed to find a gap out wide, slip a tackle and go over. He converted his own try to give his side an early lead.

The Highlanders came back into the game and, after a concentrated spell of pressure on the Hurricanes tryline, it looked as though the team was over after a jinking Frizell run. But he bounced the ball in the art of trying to score and it was rubbed out.

The Highlanders were lacking in accuracy and their attack was being picked off by a charging and hard-hitting defence.

That defence though was going beyond the laws at times and, just after the 20-minute mark, Hurricanes prop Tyrel Lomax was yellow carded after his side was judged to be constantly infringing.

The Highlanders looked to make the most of the advantage. Winger Freedom Vahaakolo went very close but was lowered half a metre short.

Eventually, the home team got the five-pointer. It won a lineout 5m out, drove it up and lock Bryn Evans went over.

The Hurricanes though had the final say in the first half when, after battering away, they went right down the middle and Barrett took an inside ball from Ngani Laumape to score under the posts.