Courageous effort but no reward 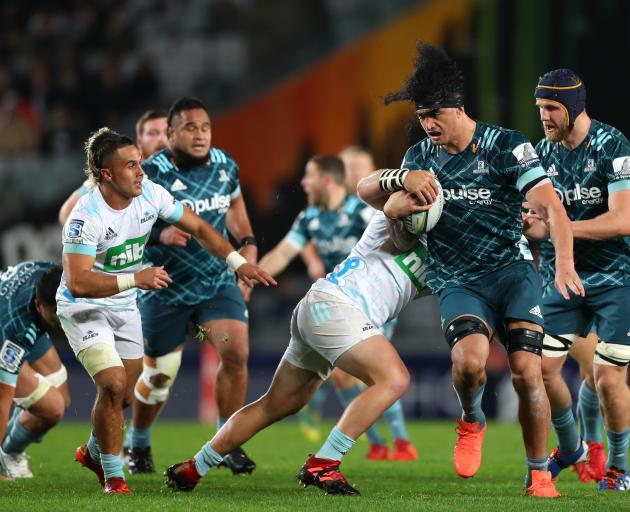 Pari Pari Parkinson looks to bust through the Blues defence at Eden Park on Saturday. Photo: Getty Images
Plenty of guts but ultimately no reward.

The Highlanders should be proud but there was still plenty of disappointment.

The team lost 27-24 to the Blues in Auckland on Saturday night but could quite easily have won the game.

The Highlanders decided against going for a penalty which would have tied the game up in the dying minutes, instead kicking for touch.

But they did not get the resulting lineout right and the Blues managed to hold the maul up and secure the turnover.

Highlanders coach Aaron Mauger backed the crucial decision but said the execution was not quite right.

"I’d back the boys 100% that they went for the try. We came up to win the game and that is what we tried to do," Mauger said.

"But we had to be better there [at the lineout]. Not allow them to come through. We missed the detail there and were a bit high."

Mauger said the side had played well, showing some real guts against a good Blues outfit, but there was plenty of disappointment the sideat the loss.

"We showed some real resilience throughout the game, especially the way we responded at halftime, and we put ourselves in the position to get ahead. There were a couple of key moments, soft moments in the first half where we really put ourselves under pressure.

"Then there was a 15-minute period in the second half where we couldn’t get out of our 22m. They only scored five points but we missed taking advantage of having Rieko Ioane in the bin and them being down to 14 men."

The side was trailing 22-10 at the break but came out firing to lead 24-22 with just over a quarter of the game remaining.

Mauger said the side was composed at halftime and the team just had to have higher intensity and get set a bit earlier.

"There are lots of things to be proud of but, ultimately, we are disappointed because we did not win the game."

The set piece was again impressive from the Highlanders and the hard work put in on the training field and good work by coaches Mark Hammett and Clarke Dermody was paying off.

Winger Sam Gilbert hurt his knee and went off in the first half. Mauger said Gilbert was putting some weight on his knee after the game but would be checked out fully over the next couple of days.

It was an up and down night for fullback Scott Gregory, who showed some physicality on attack but dropped a couple of high balls and put in some aimless kicks.

"It was a real mixed bag from Scotty. His physicality was good and then there was a couple of moments he would learn from. Everyone goes through that as a young player."

The side would have a slow start to the week after a bruising encounter in Auckland and then host the Crusaders at Forsyth Barr Stadium on Saturday night.