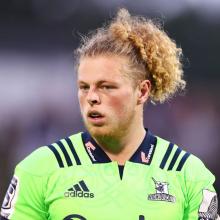 Scott Gregory. Photo: Getty Images
Highlanders and All Black halfback Aaron Smith knows what it is like to "carry the sack of stones around the whole week".

He has had that sort of game before and can certainly relate to how Highlanders utility back Scott Gregory must be feeling.

The 21-year-old had his first run-on start for the franchise in the match against the Blues on at Eden Park on Saturday night.

The evening did not go as well as he would have hoped. He came up with some costly errors and has been dropped from tomorrow’s game-day squad.

"We’ve been trying to get around Scotty and other players who maybe did not play their greatest game," Smith said.

"I just said ‘let go of the rocks, mate, and just come back and play and keep training hard. You’ll get another shot’.

"The beauty of what we do is we have each other to depend on. I’ve had a few shockers in my time and the best thing to do is own it ... but just learn from it."

"He is a quality football player and we really back him," Mauger said. "We just felt the right thing to do this week was for him to go and play club footy.

"The bench make-up was something we discussed but I just think playing at home, under the roof, Vili Koroi’s skill set and his ability to really spark a game ... I think he is going to be a good guy to bring off the bench and add some real firepower for us."

Mauger said Gregory would get opportunities in the future.

"Being the man he is he has bounced back through the week and has got his energy up. I’m really proud of the way our boys have got around him and helped him bounce back."