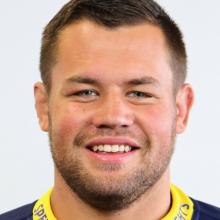 Two years ago this month, Edmonds (27) badly injured his knee in a game against the Force at Forsyth Barr Stadium.

The Hawke’s Bay prop was taken off the field and is yet to play again. Whether he gets on the field again is still uncertain and a decision on his playing future will be made at the end of the season.

In the match on April 1, 2016, Edmonds left the field after a collision around a breakdown in which he hyper-extended his left knee.

He said Edmonds ruptured all the ligaments in the knee, effectively dislocating it, and had also damaged a nerve in the knee. He had an operation to fix the ligaments but the damaged nerve had led to him suffering from drop foot.

He had entered a rehabilitation programme, which he was still working through. Any regrowth of the nerve would take a long time, Singh said.

Edmonds had spent time in Dunedin last season to work with the Highlanders medical team but was located in central Hawke’s Bay this year. There was an indefinite time for recovery and the player, the Highlanders and New Zealand Rugby had agreed to look at his playing future at the end of this season.

He had a two-year contract with the franchise, which would finish at the end of this year.

Singh said it was unclear whether Edmonds would recover and all that could be done was provide the right environment for him.

Edmonds was taking the injury month by month and was getting on with life.

The loosehead prop had a slow rise but ended up being a key player as the Highlanders marched to the title in 2015.

He was signed by the franchise after playing one game for the Hurricanes in 2014.

He missed the first game of the 2015 season but then played every game of the successful campaign, which culminated in a first-ever title for the Highlanders when they beat the Hurricanes in Wellington in the final.

Edmonds played the first six games of the 2016 season before the injury.

He helped out with the scrum coaching of the Hawke’s Bay Mitre 10 Cup team last year.

It is a tough injury to take for the Magpies man, as Edmonds was highly rated by coaches in New Zealand. With some big gaps in the loosehead department at the moment, due to retirements and injuries, he could have been a candidate to wear the black jersey.

Sadly, injury has put a dampener on those dreams.