By Adrian Seconi
0 Comments
For once Kayne Hammington will not have to perform some sort of theatrical warmup on the sideline just to catch the coach’s attention.

The Highlanders back-up halfback has been handed a rare start.

And he is really looking forward to running on against the Waratahs at Forsyth Barr Stadium tonight for what will be his 50th appearance for the franchise. 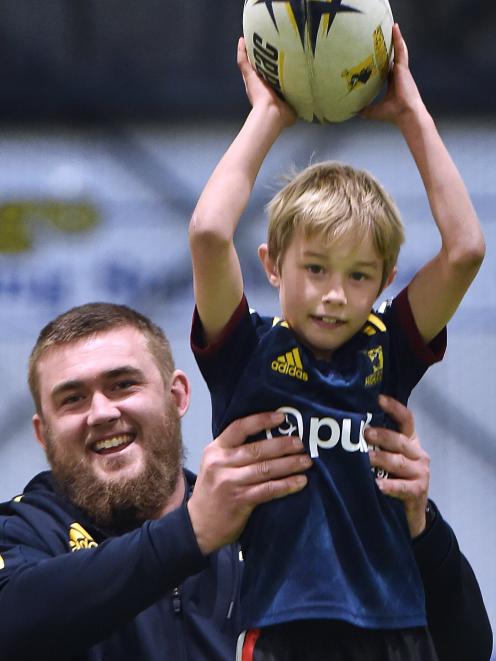 Highlander Jeff Thwaites lifts Levi Stafford (7) of Dunedin during Highlanders coaching kids at the Edgar Centre last night. The Highlanders were out mixing with the community yesterday as they get ready for the game against the Waratahs tonight. They held a skills session at the Edgar Centre. Tonight’s game also doubles as a club rugby day, with fans encouraged to wear club jerseys to the game. PHOTO: PETER MCINTOSH
He has been the understudy to Aaron Smith since arriving in Dunedin in 2017.

The rise of Folau Fakatava cut into his opportunities as well. But with Smith being rested and Fakatava out with a knee injury, Hammington will take centre stage.

He was lured south from the Chiefs by Tony Brown four years ago and made his debut against his former side.

"I came off the bench for a change and managed to get a wee run" he joked.

"It was awesome to be under the roof and have that year down here. It has been home ever since."

The 30-year-old had been planning on staying with the Chiefs. But the chance to move south and play at Forsyth Barr Stadium while learning from the best in Smith was a sterling opportunity.

He would love to get more opportunities to start games, but his role as Smith’s back-up was still a "dream job" and it was "not hard to find the motivation" to train.

Smith’s work ethic was "second to none" and Fakatava is in command of a devastating running game. And Hammington has learned plenty from both men, although "there are plenty of young guys floating around ... so any opportunity I get is pretty awesome".

"I’m pretty pumped to get on the field and run out this weekend.

"As you get older, you realise how vital the 9s can be in terms of controlling the game. It is a pretty pivotal role on the field, so hopefully I’ve learnt a lot around that and it is something I think is a bit of a strength of mine now."

Starting a game from the bench can be a bit of an art. Just getting the energy levels right is a challenge. There is never any certainty around when or if you might get on.

And of course you have to get yourself noticed. Hammington has a strategy for that.

"You just chuck those optimistic warm-ups out there and hopefully the coach will see and you’ll get on the field," he quipped.

The Waratahs have played some attacking rugby this season but it has not translated into a single win.

They might be winless but Hammington cautioned against taking the team lightly.

One of the Waratahs’ key players is his opposite. Jake Gordon has been in good form and is arguably a leading contender for the Wallabies.

"He has been playing some outstanding footy and he is pivotal in their game and the way they like to play.

"They are a bloody good attacking team and he plays with speed and uses all the options."

The Highlanders have picked the fixture to host its annual celebration of grassroots rugby.

All registered junior rugby players, coaches and referees have been invited to attend the match and the annual junior club race will take place at halftime. 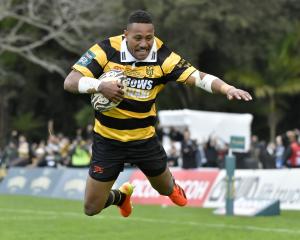