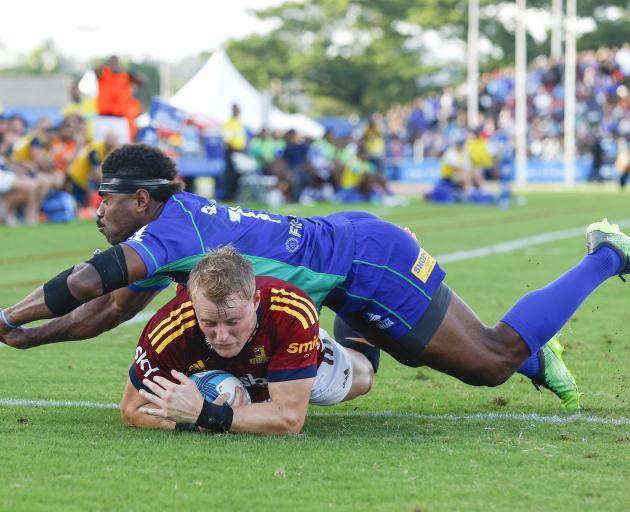 Highlanders winger Sam Gilbert scores a try in the tackle of his Fijian Drua counterpart Vinaya Habosi during a round 11 Super Rugby Pacific match at ANZ Stadium in Suva on Saturday. Photos: Getty Images
The season remains alive, by the barest of margins.

It may not have come as easily as many expected — or as easily as it should have — but the Highlanders have a second win on the board.

They trailed the Fijian Drua 21-10 at one point and it was not until Rhys Marshall crashed over from a lineout drive midway through the second half that they took the lead.

Marshall’s try gave the Highlanders a 27-24 lead, which was how the score remained in Suva on Saturday.

It was certainly not a performance to gush about.

Meli Derenalagi leads his team in the Na Bole war dance.
The defence and ball security was shocking at times.

But it was a win. And for a team that has made a habit of getting close, but being unable to come out on top, that is the most important thing.

It also keeps the Highlanders within touching distance of the top eight. They are 10th, but just two points off the eighth-placed Melbourne Rebels with four games remaining.

"That was a full 80-minute effort," Highlanders captain Aaron Smith said in his post-match television interview.

"What an occasion. Awesome to be a part of a bit of history, the first game over here.

"It was a hell of a game and I’m so proud of our boys for sticking in there. It was a bloody hot day, conditions were tough and we knew it was going to take the full 80 minutes.

"We knew the Fijians would be dangerous. The Drua are a team that can score out of nothing. It was never going to be easy coming over there, but I’m beyond proud of our boys."

The Drua attacked down the left wing and exposed the Highlanders several times in the first 25 minutes.

Left winger Vinaya Habosi showed all his pace and flair, as he was put into space and the visitors looked hopelessly lost. 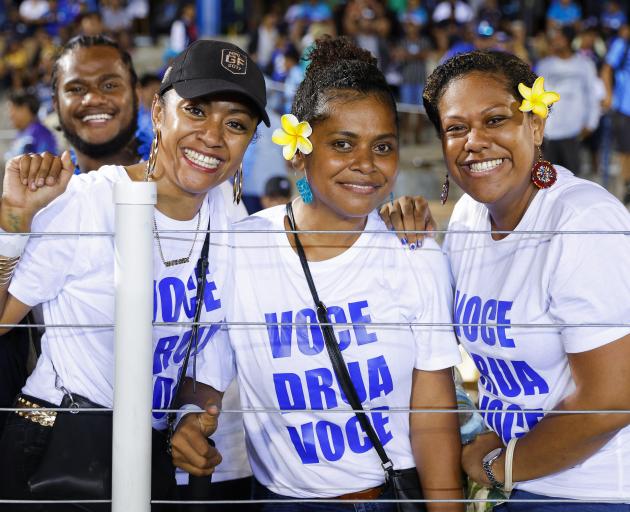 Fijian Drua fans show their allegiance.
It took him just two minutes to break out inside his own half, linking with halfback Frank Lomani on the inside to give the Drua an early lead.

Another followed after 15 minutes, when hooker Mesulame Dolokoto won a breakdown turnover inside the Drua’s 22m.

They transitioned to attack at lightning speed, spinning it wide to Habosi, who scorched his opposite Sam Gilbert on the outside.

The Highlanders’ cover could not reach him either, as he went untouched to score the Drua’s second try.

A third came seven minutes later, when Habosi was again put into space up the left wing.

This time, a superb cover tackle from Aaron Smith hauled in the speedster 10m short of the line. 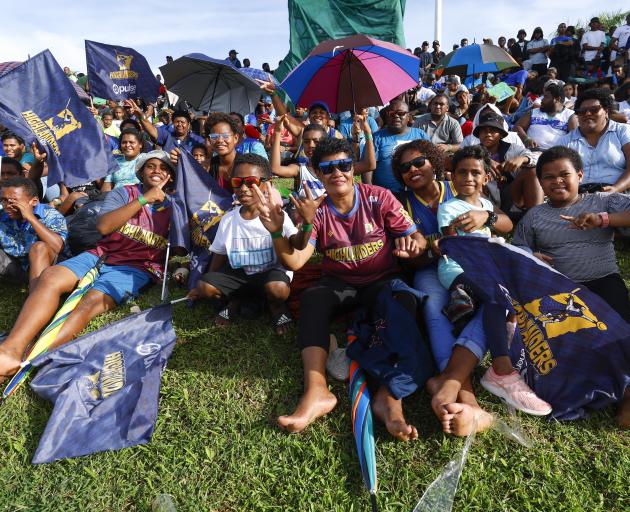 A group of Highlanders fans soak up the atmosphere.
However, the Drua were patient and second five Kaleti Ravouvou got on the end of Tei Tela’s grubber in behind the line to score.

It left the Highlanders trailing 21-10 — Gilbert had finished off a passage in the corner for a Highlanders try among all that — having leaked close to a point a minute.

They had seemingly no answer to an opponent that had more flair in one player than the Highlanders possess in their entire team.

But they stayed patient and worked their way back into the game.

Marino Mikaele-Tu’u carried strongly all day from No 8 and he was able to crash over to make it 21-17. 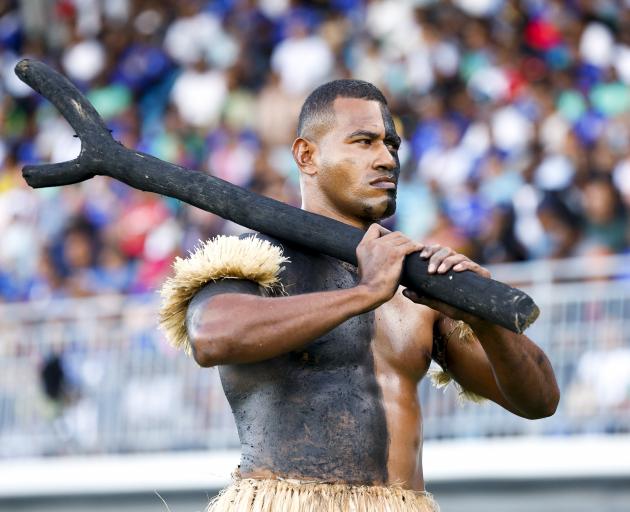 a Fijian cultural performer in action.
The Drua kicked a penalty to make it 24-17 at halftime, and that was the last time they scored.

While the Highlanders did not offer much more in attack, their defence tightened up.

A penalty pulled them to within four, then a decision to turn down another shot next to the posts and kick for the corner paid off.

They mounted a lineout drive and Marshall touched down to give the Highlanders their first lead of the game.

That was how the score stayed as the visitors held on for the most important of wins.

Smith said the Highlanders’ display with the boot had been key in the turnaround.

"I think early on, we missed a few tackles, which led them to tries," Smith said.

"We were able to use our kicking game really well, to turn them around, then our defence backed that up. 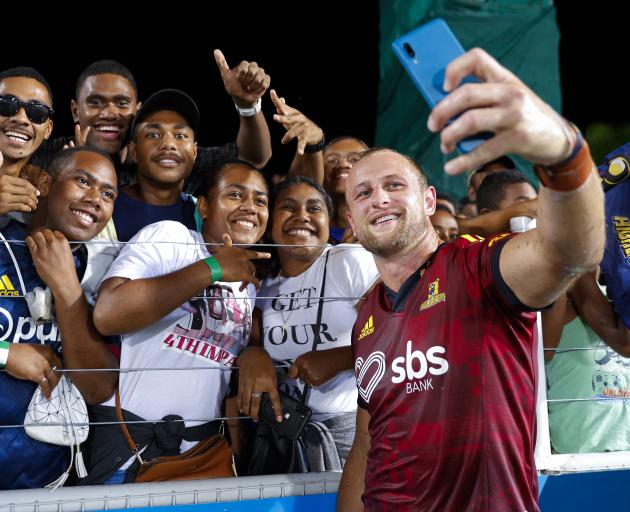 Hugh Renton takes a photo with fans after the match.
"Then we were able to lean on our lineout maul late in the game, which was real critical.

"Even in the last six to seven minutes, we won some key moments and stayed calm.

"The bench came on and did an awesome job. It took the full squad of 23."

The Highlanders now return to Australia to play the Reds on Friday night.