The Highlanders’ James Lentjes runs out on to the field during the round 2 Super Rugby match against the Sharks at Forsyth Barr Stadium in early February. Photo: Getty Images
James Lentjes has a head start on all of us.

The Highlanders captain is in lockdown, and as with the rest of the nation, it is not by choice.

But it is not because of Covid-19 that he has been resting up on the couch over the past couple of weeks.

Lentjes is recovering from an operation a couple of weeks ago after a sickening injury against the Rebels at Forsyth Barr Stadium on February 28.

The openside flanker went in to try to get the ball at a breakdown, but was cleaned out and ended up dislocating his ankle and breaking his fibula. 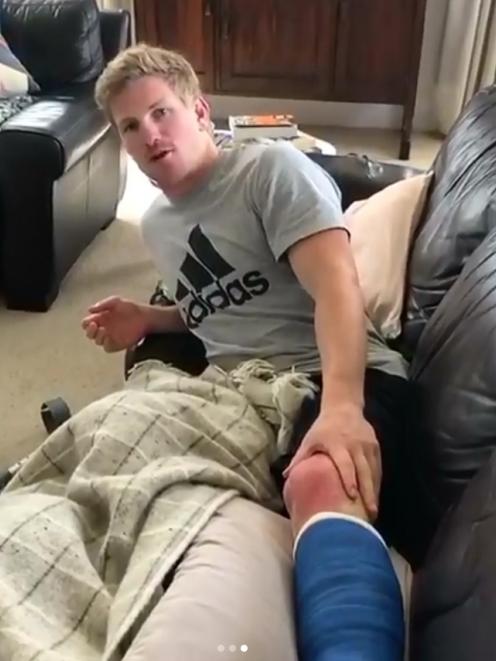 Highlanders captain James Lentjes with the cast on his leg. Photo: Supplied
Lentjes had an operation on March 11, having to wait nearly two weeks for the swelling on his leg to go down. The three-hour operation left him with seven screws in his leg, as the fibula did not break cleanly, with one big screw holding the bone together.

Lentjes said the injury at the time was sore, but not as bad as others he had experienced.

‘‘Yeah it was not great, but the pain was not as great as when I dislocated my elbow a few years ago,’’ he said.

‘‘But I don’t know how those guys out in the country do it when they have to wait an hour for an ambulance.’’

Lentjes (29) is now laid up on the couch and will be for another four weeks. He had crutches and a wheeled crutch, but can not put any weight on his foot.

‘‘Potentially I can get back for Super Rugby next year if the rehab goes all right. Now I just lie on the couch. I can’t miss [watching] rugby as there is no rugby to miss.

‘‘I have knocked off a couple of books, been through all the Netflix, and watched a lot of TV. I bought myself a PlayStation this week so I can have a go on that. I haven’t played on that for a long time. Back in the uni days.’’

He hoped to have six of the seven screws removed in a few months, and so far everything was going well.

Lentjes said he did not remember a lot about the incident against the Rebels as it all happened really quickly.

He praised the help of the Highlanders medical staff and all those who have assisted since the injury.

The Highlanders’ season was now in limbo and Lentjes said he would obviously like to be up and about. But it was just the way the season had panned out.

He felt the team was improving in each game, though he only played four games.

The side was now not playing as Super Rugby is suspended. Lentjes is in Christchurch at his in-laws. He married his wife Alice in November.

He is ready to head back to Dunedin eventually, but like all of us will have four weeks of isolation to get through.

‘‘I might have broken my leg but you just have to look around now and realise there is a lot of people worse off than me.

‘‘You’ve got to keep things in perspective.’’ 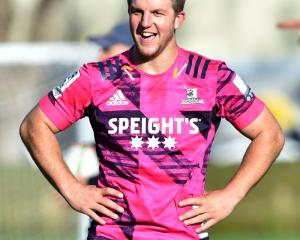