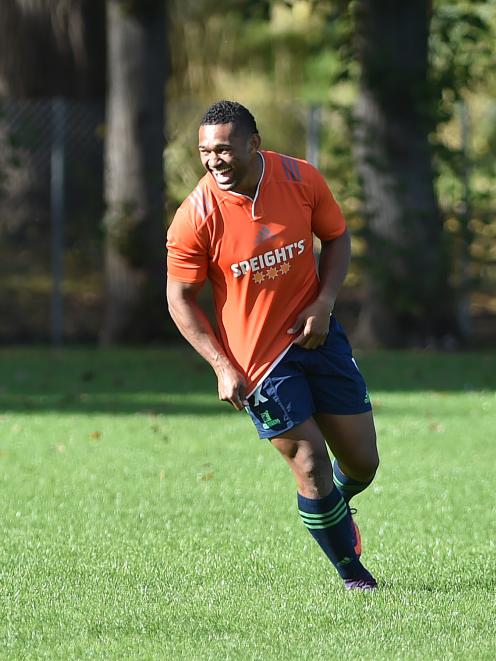 Highlanders and All Black winger Waisake Naholo. Photo by Gregor Richardson.
There was one All Black back from the casualty ward on the plane yesterday to Africa.

But three of the side's All Blacks have been left behind as the Highlanders continue to battle on entering the home straight of the regular season.

The side won 32-27 in a rugged battle against the Jaguares at Forsyth Barr Stadium on Saturday and with it passed their opponent on the points table. The side, which has four games left, now sits fifth on the ladder, although it is still to have its second bye.

The team was scheduled to leave Dunedin late yesterday morning, to stay in Sydney last night, before heading on to South Africa this morning.

The team will base itself in Johannesburg in the first week as it gets ready to take on the Lions.

The side will take 27 players to South Africa and it will include All Black winger Waisake Naholo, who returns to the squad after a frustrating period out with a knee injury.

He was not quite right for the game against the Jaguares on Saturday night but was set to join the party for the African trip.

Naholo is making the jaunt to Africa but three of his All Black colleagues, Ben Smith, Liam Squire and Jackson Hemopo, are staying home.

Smith is out with a hamstring injury and Highlanders coach Aaron Mauger confirmed after the win on Saturday night that Squire and Hemopo will not be heading away.

Mauger said Squire was working through some personal and family issues and was concentrating on those at the moment.

He declined to elaborate on the reasons for Squire not playing on Saturday and remaining home for the trip. He was still in Dunedin. There was a possibility Squire could head over for the second game on the trip, against the Stormers in Cape Town on May 26 [NZ time] but in all likelihood he would stay in Dunedin.

He needed to tend to a few things in Dunedin rather than head to Africa, Mauger said.

Squire has not played all season and there was some real excitement over his planned return to the field on Saturday night. But it did not happen.

Shannon Frizell did not play against the Jaguares, not making the bench, and now has fulfilled his All Black rest requirements for this season.

Hemopo, who picked up a knee injury in the draw against the Chiefs on May 3, started training again late last week and was ruled out of the game on Saturday night.

With Hemopo unlikely to be available to play the Lions next weekend, it was felt it was better to leave him in New Zealand for the two weeks and get him right for the rest of the season.

Jack Whetton takes the place of Hemopo in the 27-man squad.

In other results in the weekend, the Crusaders beat the Bulls 45-13, while the Chiefs defeated the Sharks 29-23.

The Lions squeezed past the Waratahs 29-28 in Johannesburg, and the Brumbies had a bonus point 33-0 win over the Sunwolves.