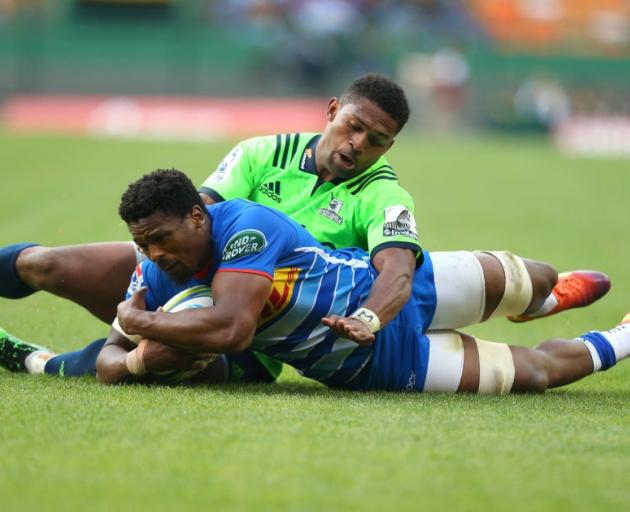 Sikhumbuzo Notshe scores for the Stormers as Waisake Naholo is unable to cover for the Highlanders in South Africa two weeks ago. Photo: Getty Images
As the Highlanders head into their crunch game on Friday night, the onus will be on defence and trying to stop the Waratahs from scoring.

The side's defence has come into question this year and there is no denying it is nowhere near where it should be.

But lapses on defence cannot be the total reason the Highlanders are struggling to make the playoffs.

Sure, the work when the side does not have the ball could be better but not all the woes of the season can be heaped on to defence coach, the departing Glenn Delaney.

In most sports, titles and championship victories are said to be won through performance on defence.

Having to only score three tries to win a game is much easier than having to score five or six to finish ahead of the opposition.

Not including last Friday night's game against the Bulls, which ended in a draw, the side on average misses more than 25 tackles a game, the second-worst in the competition. It has a 81.8% success rate - only the Sunwolves are marginally worse. The Waratahs are top in this department on 86.9% yet they sit behind the Highlanders on the competition table.

A more intriguing statistic is that the Highlanders make only 111 tackles per game, the third-fewest in the competition. That is down significantly from a couple of years ago when it was one of the highest-tackling sides. The side had a tactic then - when under different coaches - of kicking much more ball away and backing its defence to force turnovers and make breaks.

However, it is nigh on impossible to get turnovers these days as referees give the attacking side more time to deliver the ball at the breakdown.

The game is also much more confrontational. Teams look to tire other sides out with big, powerful ball runners and only revert to kicking or moving the ball wide after they have gone up route one to start with.

However, the team's biggest issue is in the number of times it is unable to keep up pressure. It can not get a roll-on in its game as it hands the ball over so much.

In the 14 games the side has played this, year nine of them have been decided by eight points or fewer, two of them being draws.

So the Highlanders are always close but one could argue that is because it keeps teams in the game. The side has the poorest kick-off reception of any team in the competition. The set-up at receiving kick-offs seems ill thought-out and hesitant.

Coach Aaron Mauger called them poor last week and he was not wrong.

By giving the ball back straight to the opposition after scoring, any momentum built up is immediately lost.

That more than any statistic is the cause of its standing.