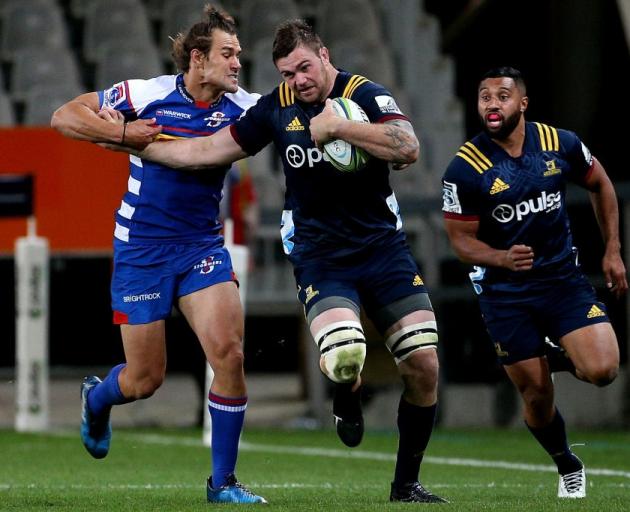 Liam Squire on the run for the Highlanders against the Stormers. Photo: Getty Images
Highlanders loose forward Liam Squire might have missed more games than he has played since the last World Cup but it looks as though he will be welcomed back into the All Blacks with open arms.

The World Cup squad will be named in Auckland at noon tomorrow and it is expected Squire's name will be included.

Squire (28) opted out of the Rugby Championship, telling coach Steve Hansen he was not ready for the demands of test play.

He missed the bulk of the Highlanders season, firstly through hip and knee injuries and then making himself unavailable for personal reasons. He played half a club game for Taieri in late May.

He played three games at the end of the season for the franchise in his final season as he has signed a contract to play for the next two seasons in Japan.

Hansen left the door open for Squire and Stuff reported yesterday the loose forward had been in contact with Hansen and made himself available.

Squire is a bruising, abrasive loosie, who is a real asset in the modern combative game.

Injuries have severely impacted on Squire's career and his most recent test was against Ireland in Dunlin last November. A knee injury forced him off the field.

He has been playing for Tasman in the Mitre 10 Cup and the side has had three solid victories. With no-one putting their hand up to take his place, Squire is an easy guy to pick.

Wellington and Hurricanes forward Vaea Fifita picked up a mystery knee injury and did not play for Wellington in its win over Canterbury on Friday night.

Jackson Hemopo does not have enough experience for the blindside role while Luke Jacobson is the bolter, earning selection for the All Blacks on the back of an outstanding Super Rugby season.

But Squire would presumably win out over him through experience and the selectors knowing what they are getting.