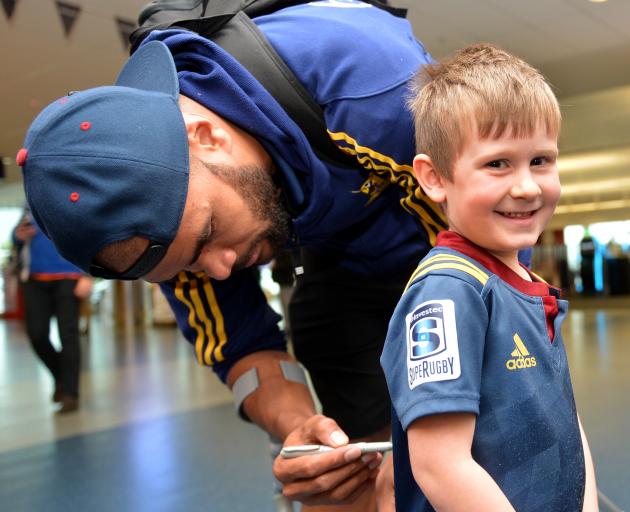 Young Highlanders fan Beau Glover (4) gets his jersey signed by winger Patrick Osborne at Dunedin International Airport yesterday. Photo by Stephen Jaquiery.
After almost a day in the air, a jaded Highlanders squad arrived back in Dunedin yesterday morning in its last collective act of the 2016 Super rugby season.

The squad left South Africa on Tuesday morning (NZ time) following its semifinal loss to the Lions in Johannesburg during the weekend, and arrived back to a smattering of fans at Dunedin International Airport.

It was a far cry from this time just over a year ago, when hundreds of Highlanders fans turned out to welcome the side home from Wellington after it beat the Hurricanes to win its first Super rugby title.

The Highlanders were one win away from setting up a final rematch against the 'Canes at Westpac Stadium this weekend, but its 42-30 loss at Ellis Park spelled the end of a gruelling season.

The side returned to South Africa for the knockout match less than a month after it travelled there for its round-robin match against the Kings in Port Elizabeth.

It made the 14-hour journey from Johannesburg back to Sydney on Tuesday before flying to Auckland and spending the night there, then travelling to Dunedin early yesterday.

"We would have loved to come back with the win and spirits would have been a bit different, but it wasn't to be.

"It was obviously really disappointing not to get the result but we gave ourselves a chance and we did everything possible to try and win that game, and it wasn't for a lack of trying or a lack of effort.

"We just came up against a better team on the day and we can live with that and, sometimes, that's just sport.''

The Highlanders were forced to travel overseas for their quarterfinal and semifinal despite finishing third in the competition on points, but Sopoaga said there were no excuses.

"Travel's never an excuse for us. We had a full, eight-day turnaround and enough time to acclimatise [before the semifinal] and we just weren't good enough on the day.

"When I look back on the season, there are some great memories. It took us around the world and then some. We started off in Hong Kong ... so it was a pretty special season and it was just unfortunate not to finish with the result that we would have loved.''

Loose forward Liam Squire agreed the season had been a memorable one.

"We didn't get the end result but it's been an awesome season for the lads, and I think everyone enjoyed every minute of it and are excited for next season.''

Both players are off duty for the next week before they join the All Blacks squad in Auckland to prepare for the first test of the Rugby Championship, against Australia in Sydney on August 20.