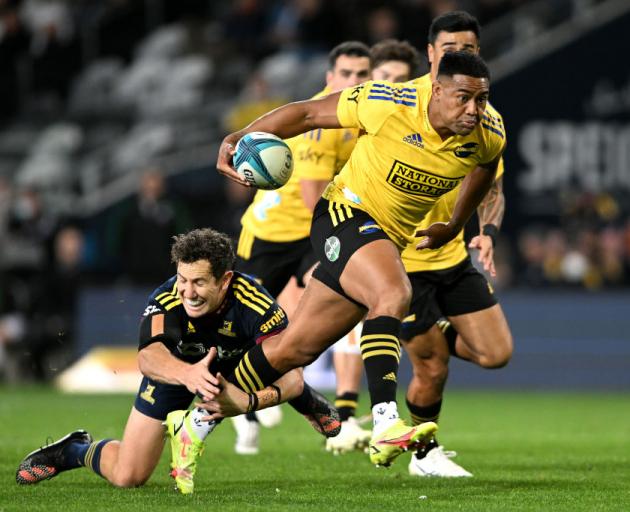 Hurricanes winger Julian Savea attempts to evade the tackle of Highlanders first five Marty Banks at Forsyth Barr Stadium last night. Photo: Getty Images
For once it was the Highlanders' opponent that could not finish.

Had the Hurricanes executed on their chances, tonight's game at Forsyth Barr Stadium could have been out of the Highlanders' reach after 20 minutes.

It was not enough to save the hosts.

But it certainly kept them in the game until the dying moments, having taken the lead with 15 minutes to play.

Saula Ma'u went within inches of a match-winning try with the final play for the game, but the Highlanders prop was deemed to have been held up on review.

The Hurricanes should never have let it be that close, though.

Twice in the opening 15 minutes they squandered what should have been certain tries to a rampaging Julian Savea – a bad pass and a dropped ball over the line the culprits.

A third chance also went begging, when Jordie Barrett could not hold on to a kick 5m out.

So when lock Josh Dickson was sent from the field after 20 minutes, for a reckless shoulder to the head of the ball carrier, the Highlanders had done well to trail just 7-3.

Winger Salesi Rayasi cut through the defence off the lineout from the ensuing penalty to make it 14-3.

It ended a 20-minute spell in which the Highlanders were forced to tackle, often on the back foot.

Savea made several runs swatting away defenders, reminiscent of the form that made him among the world's best at the 2015 World Cup.

But it was not just him.

All too often the Highlanders were beaten in the collision, unable to handle the offload, or left chasing the visitors' dangerous outside backs out wide.

However, the Highlanders slowly worked their way back into the game from there.

Their energy lifted throughout the 20 minutes they played with 14 men and they did a better job controlling possession.

Three points followed, courtesy of a nice piece of breakdown work by Liam Coltman, drew them to within eight.

When Max Hicks emerged a minute before halftime, restoring the team to 15 men, it had done well to keep the score to14-6, all things considered.

That had as much to do with the Hurricanes' lack of execution as it did the Highlanders' defence.

The same could be said in reverse about many who have withstood pressure from the Highlanders this season, though.

Barrett made that 17-6 just after the break, before Highlanders Andrew Makalio crossed from a lineout drive to peg it to within six.

It proved a turning point.

The Highlanders took the upper-hand through the middle of the second half and Marty Banks kicked a penalty from just inside halfway.

That pulled the Highlanders to within three.

The Hurricanes attack had well and truly dampened by that point, while the Highlanders began having success at the breakdown.

They took the lead as Thomas Umaga-Jensen batted a Mitch Hunt grubber back into the replacement first five on a counterattack down the left wing.

It left the Hurricanes scrambling, as Daniel Lienert-Brown was pulled down near the line.

Ardie Savea came up with a turnover, but the Highlanders got it back immediately and Hicks crashed over to make it 21-17.

But late try to Morgan sealed the Highlanders fate, the replacement first five crossing in the left corner with five minutes to play.