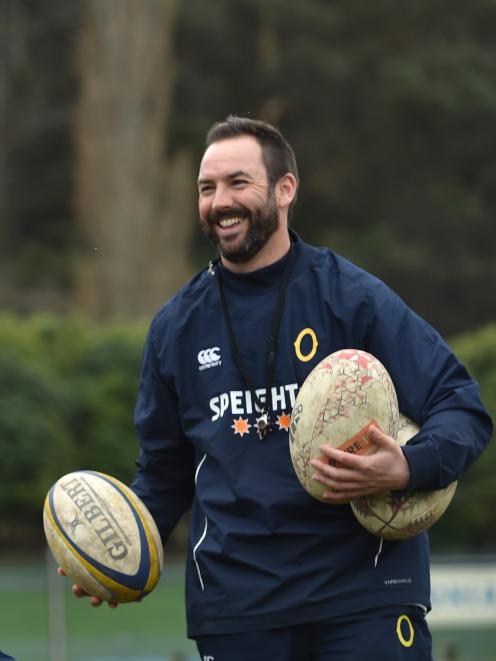 The 39-year-old Otago attack coach will head to Boston later this year to take up the role of head coach for the New England Free Jacks.

The team made its debut in the Major League Rugby (MLR) competition this season but the tournament was abandoned after five games because of the Covid-19 pandemic.

Martin, a teacher by profession, has signed a three-year deal with the franchise. The season runs from February to May, so it works well with his coaching commitments in Dunedin.

"[MLR] is in its infancy in terms of a competition ... but it is actually growing hugely," Martin said.

"There is a new team starting up in LA with Australian backers and also one which is to be based in Hawaii.

"There are some big names as well. Obviously Ma’a Nonu went into the competition before Covid.

"And there are some really good European and South African players looking at the competition."

Martin’s connection with the side is through a former Otago Boys’ High pupil of his, Tom Kindley. Kindley is the performance manager at the franchise and alerted Martin about the role.

"I’ve never been [to Boston] so I’m pretty excited about heading over there.

"The Free Jacks were pretty consistent. They sat around mid-table," he said.

"But they had some close losses before Covid, so they are pushing the top teams.

"They maybe lacked a little bit of X-factor but ... I think they have the potential to do very well."

A former premier halfback, he starting climbing the ladder during his stint with the Otago Boys’ High School First XV.

The team won the Highlanders competition four consecutive years before the competition was disbanded after the 2015 season.

In 2018 he was appointed as the attack coach for Otago and remains in that role.

Later that year he was named head coach for the Singapore-based Asia Pacific Dragons which played in the Rapid Rugby competition.

In October he moved to Melbourne to take up a role as a kicking and skills coach for the Melbourne Rebels in the Super Rugby competition.

He returned home when Covid-19 forced the competition into a hiatus.

Super Rugby Australia is running but Martin remains based in Dunedin and does his work online.

He said it has been a "whirlwind" since moving into coaching fulltime in late 2018.

"I’ve been based in Singapore, based in Melbourne and back and forth to Dunedin and now I’m going to be based in Boston. It has been quite a journey."