'Dire situation': Unions could pull out of Mitre 10 Cup 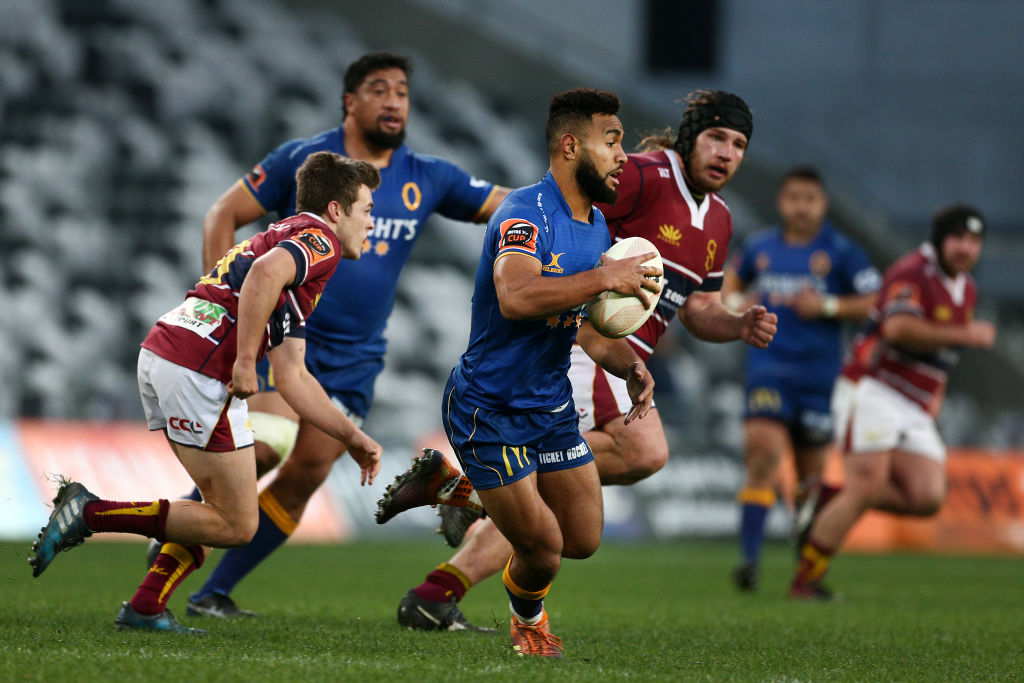 Otago and Southland in Mitre 10 Cup action at Forsyth Barr Stadium in Dunedin last year. Photo: Getty Images
Four provincial unions – Taranaki, Northland, Southland and North Harbour – may be forced to pull out of this year's Mitre 10 Cup competition over fears they will not be able to pay their players.

While eight other unions have committed to the competition, Wellington and Otago are also understood to be "on the fence" in similar precarious positions.

North Harbour Rugby chairman Gerard van Tilborg says the situation is dire and can be saved only by the players agreeing to take far less than they are now.

"Harbour is absolutely committed to playing in a provincial union competition provided it can be adequately funded," van Tilborg said. "The situation in negotiations between New Zealand Rugby and the Players' Association are making that marginal.

"The cuts aren't big enough. We've had staff take cuts between 45 and 30 percent salary. We've spoken to most of our players who have been very supportive but we obviously can't go outside the collective and we need to provide a similar bottom-end ratio of roughly a 30 percent cut to make [fielding a team] viable.

"If we can't, we'll consider what our options are when and if we see what the competition looks like. With teams potentially pulling out what is it going to look like?

"We're not going to wreck the union for something that is unsustainable."

Provincial unions have been locked in negotiations with the Players' Association for the past month as attempts continue to agree a wage-cut figure that will allow the tournament to progress with all 14 teams involved.

As it stands, significant concessions are required for all teams to make the revised September 11 start line.

Provincial union sources have told the Herald that they and the Players' Association are "10 percent apart" over an agreed wage cut, but Nichol disputes this, saying that meetings today between his organisation and New Zealand Rugby will make a lie of that.

"What we have is a situation with a lot of moving parts," Nichol said. "A lot of the modelling done to date was based on the assumption we'd have no rugby, so this is a rapidly changing space."

Nichol said the aim was still to have fully stocked Mitre 10 and Farah Palmer Cup competitions, "but how the revenue flows through to the provincial unions is the key".

"The player payments at provincial level are part of the equation. The players have to play a part in the [recovery] and we know this, but there are other things we need to understand too.

"There's the Government wage subsidy to consider. There's also the rescue package announced this week for sport. Is this relevant in this space? At this stage we don't have a clue how that money is to be distributed but there's a chance it could ease the pressure on the unions."

The ongoing standoff comes after NZ Rugby cut provincial unions' annual grants of $650,000 by 15 percent and at a time when all unions are making redundancies to ensure their survival.

"When we compare player contracting spend to previous years, the models we're looking at would have a combination of player payment reductions, government subsidy and contribution from the player payment pool would have provinces saving more than half of what they've previously spent," Nichol said.

Nichol said the players weren't the only ones who needed to step up.

"We're doing everything we can to take the pressure off the provincial unions' wage bill," he said.

"But at the same time we're looking at how much the players can be cut. NZR has to look at the way it distributes its revenue and the provincial unions have to look at what they're doing."

Last month the Players' Association and NZ Rugby agreed a 50 percent freeze on forecasted player payments for the last eight months of this year which covers Super Rugby and All Blacks players.

Provincial union contracts sit outside the player payment pool and must, therefore, be separately negotiated. This year, across the unions, there is about $15 million worth of contracts due to be honoured.

In many ways the provincial union standoff has further underlined New Zealand Rugby's deeply flawed player payment model, with the 14 unions operating under a $1.2 million salary cap contributing to the unsustainable future of the game here.

While the Mitre 10 Cup does not start for four months, the wage cut agreement is a matter of urgency as some provincial unions are paying players now and honouring contracts as they stand.

The worst-case scenario could see some provincial unions walk away from negotiations and go to the players individually.

"Very soon we need certainty," van Tilborg said. "With Covid we've been planning a number of different scenarios but we've got to the stage where everything is out of our control so we can't plan or implement and that's the difficulty.

"Unless we can get through this season in reasonable condition we're better off considering the offer from New Zealand Rugby to pull out of the provincial competition to preserve our ability to compete 2021 and beyond."

Van Tilborg said he'd had a personal assurance from NZR chairman Brent Impey that Harbour would not be penalised for pulling out of this year's competition.

"We need the RPA to recognise that even their players understand getting through 2020 is the key here so we have a future beyond that. There's no point in bankrupting unions this year ... and leaving them in a vulnerable position for 2021 and beyond," van Tilborg continued.

Cuts are being looked at elsewhere, with the prospect of teams flying in and out on match days raised – as Super Rugby teams will do – which allows for savings on accommodation.