Doing his 'homework' pays off in big way for winger Nareki 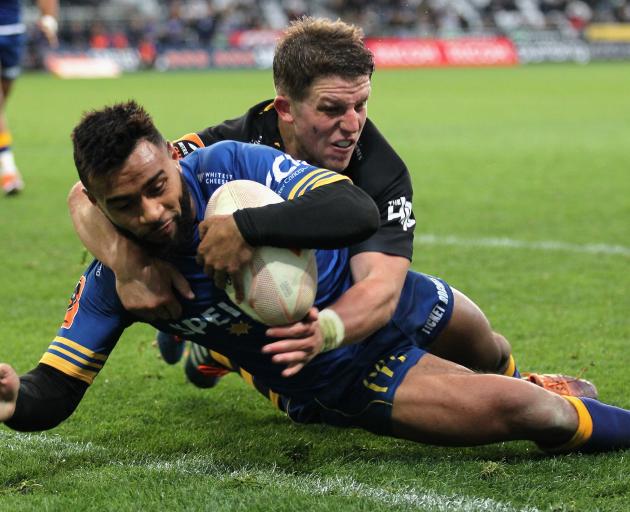 Jona Nareki slides over to score in Otago's win over Taranaki. Photo: Getty Images
He may be oozing natural talent and picking up tries left, right and centre but Otago winger Jona Nareki is putting his good form down to hard work.

Nareki turned in a standout performance for the Otago side yesterday as the blue and golds withstood a rugged Ranfurly Shield challenge from Taranaki to run out 35-27 winners.

The left winger helped himself to two tries and was a constant danger for the home team. He shaded his opposite, departing Highlanders winger Waisake Naholo.

Nareki said getting on top early was a big help for Otago.

"We started well and ended well and that was a big key for our team," he said.

"It gives you confidence. You've got that rolling ball and you're able to play wide to wide.

"Going up against him [Naholo] I took it as a challenge, and tried to tackle him when I could."

The winger has scored in every game he has played so far this season for Otago and said his form was no secret.

"I'm just nailing my homework during the week, just learning what they do on defence and identify what is their weakness. I think homework is the key to my play.

"As a winger it is about being able to finish and make the most of all the work the boys have done inside me. And having no excuses."

The former New Zealand Colt said after a season of sevens with the national team his body was feeling surprisingly good. He has signed for the Highlanders next season so is putting in some compelling form to start at the next level.

"I thought it was Josh Ioane kicking out there. But he does a lot of work and practises all the time. He was kicking all those ones from the sideline."