Fijian flair to fore as Otago holds on in shield thriller 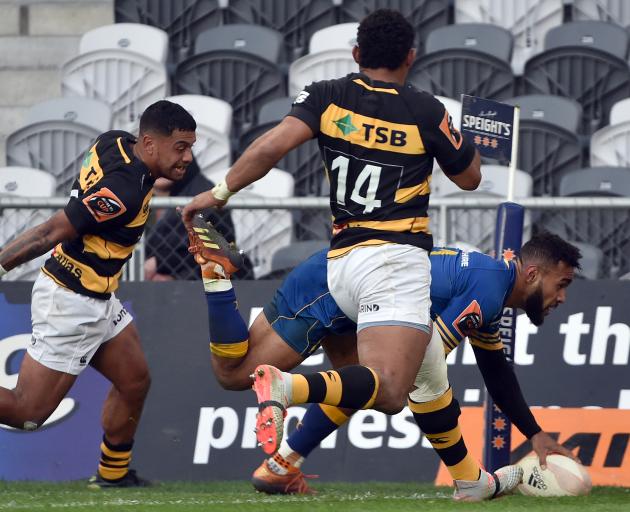 The home side came away the victor 35-27 over Taranaki in a match in which it took the chances which came along and rode on the back of Fijians Vilimoi Koroi and Jona Nareki.

Koroi was deputising for Josh Ioane at first five-eighth and many had been quick to write off his credentials.

But he looked a million dollars yesterday, scoring 20 points, slotting kicks from all over the park and being a constant threat with ball in hand.

His great mate, Jona Nareki, further out on the left wing, was a real handful, scoring two tries and setting up a third. They were the diamonds in an Otago effort which delivered the gold.

It was a tremendous effort from Otago as Taranaki had some real class in its side.

But Otago rolled its sleeves up and took over the game in the second half. It moved the ball well, finding space and managed to win the battle at the breakdown through some great body position and commitment.

Young forward Josh Hill came on at the end and secured a vital turnover as Taranaki pushed for a try.

Then right at the end came the cherry on top. Taranaki pressed but coughed the ball up, Nareki tore down field and spread the ball to winger Henry Purdy, who all but scored a try. It did not matter as the game was won.

Otago had come out quickly in the opening period and scored its first try without Taranaki getting a sniff of the ball.

The home team recycled the ball and after the forwards crunched it up, it went wide.

Some nice quick hands left the ball in the hands of centre Aleki Morris-Lome and he dived over to score in the corner with under three minutes gone.

Koroi banged over the conversion from the sideline.

Taranaki was a side that was never going to lie down and dominated the rest of the first half.

The visitors could have scored many times but dropped the ball at just the wrong time. Otago defended with plenty of guts.

Former All Black halfback Te Toiroa Tahuriorangi dropped the ball with the tryline 5m in front of him. But it did not prove too costly as Taranaki came straight back and eventually scored.

Highlanders winger Waisake Naholo, saying goodbye to the stadium he thrilled so many in, made a mazy run up the middle and when lowered passed to lock Mitch Brown who fell over to score.

That put Taranaki ahead but Otago scored right on the break to snatch the lead back. With the halftime hooter gone, Otago won a lineout and then shifted it down the blindside.

Nareki skirted down the touchline like a ballerina to score in the corner.

Koroi banged over another sideline conversion to give his side a 17-13 lead at the break.