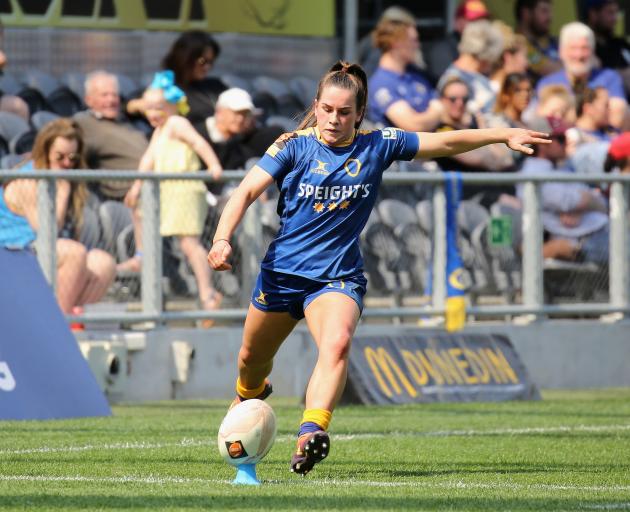 Rosie Kelly lines up a kick during the Farah Palmer Cup final at Forsyth Barr Stadium. Photo: Getty Images
For a reluctant first five-eighth she is doing a pretty good job.

Rosie Kelly (19) had another top game for the Otago Spirit yesterday, directing her side round the park and also slotting a couple of key kicks which in the end proved the difference in the Farah Palmer Cup championship final.

Kelly almost scored a try in the opening couple of minutes of the game but just after the 10-minute mark, got on the end of a nice break by her outside backs and sprinted away to score.

She did not miss a kick all day, and ended up with 107 points for the season, making her the highest points scorer in the Farah Palmer Cup. She was thrilled to get the win for the side.

"It was awesome. The side had lost the last two matches so to get out there and win was great for all of us," she said.

"It was a bit stressful at the end there but we managed to get back to our structure and move it away from their forwards."

Kelly had slotted a conversion from the sideline after fullback Sheree Hume scored near
the end and that made a real difference.

She had a new kicking tee this year and combined with a bit more practice she was getting more distance into her kicks.

Normally a halfback, she had moved out one place to help the team and she had no complaints with Rosie Buchanan-Brown doing well at halfback.

Kelly's focus would now switch to sevens where she has been selected for the Ignite7 event in Auckland next month. She was specialising in sevens but such has been her improvement in 15s she was now seeking to make progress in both.